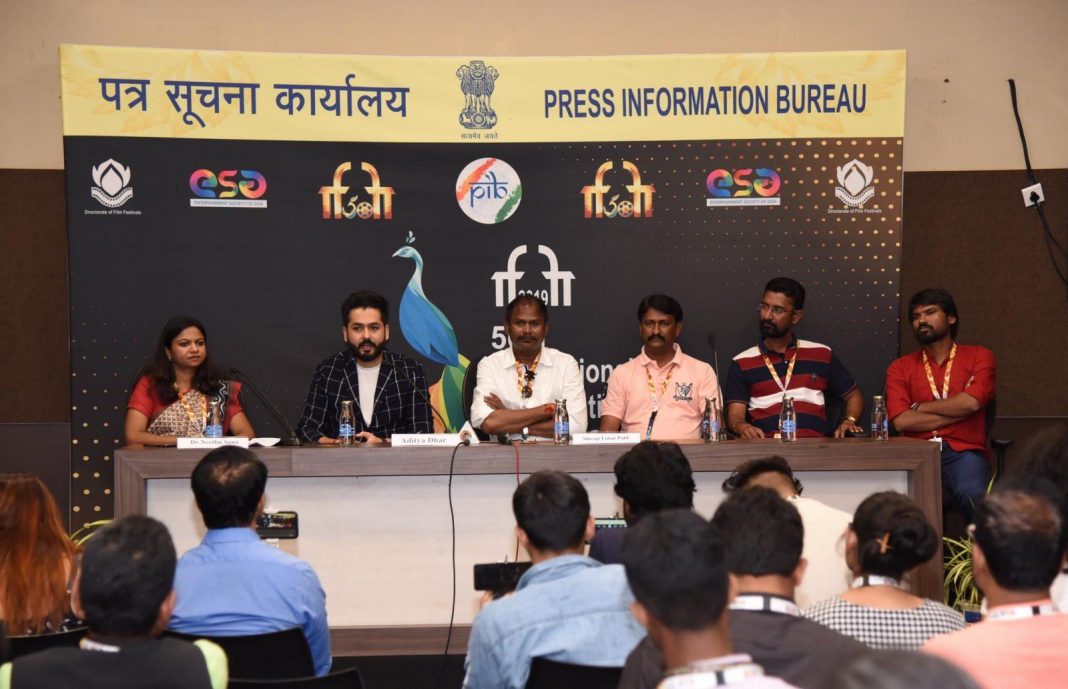 ‘How’s the Josh ? ’ is one viral slogan that got etched in the minds of hindi cine lovers quite recently. The enthusiasm created by the dialogue in the Hindi movie ‘URI: The Surgical Strike’ continued to create ripples as people started  chanting it every other occasion. It was another ‘How’s the Josh ?’ moment for the delegates and journalists at the media conference venue of the 50th International Film Festival of India when Director of ‘URI: The Surgical Strike’ Shri Aditya Dhar came to meet the press. The Director of Marathi movie Shri Shivaji Lotan Patil also joined the josh moment to talk about his National Award winning movie “Bhonga”.

Talking about the incidents that led to the making of the movie, Shri Aditya Dhar said that it is very important to have a certain level of tenacity to survive in film industry. “I was working on a film, when the Uri attacks happened and the Pakistani actors were asked to leave the country. It was this problem that actually turned into an opportunity for me by giving a good story to showcase. The film was made as a tribute to the Indian army and their families,” he said.

On the very popular ‘Hows the Josh?’ dialogue, Dhar said, “It was part of the script but Vicky Kaushal was not very convinced with the line in the beginning. But I made him understand that this is how they motivate their soldiers in the army. But the moment he said it, he himself and everybody else around the set had goosebumps and so we decided to keep it in the film.”

Responding to allegations on URI being a propaganda film, the director said that he was trying to portray the reality by showing the events that happened after the Uri attack in chronological order. “While doing that it is impossible to negate the contribution of government and other technical teams involved. If a section of society feels that it is propaganda, I can’t do anything about that, “ he added.  He also spoke about his next venture ‘Ashwatthama’ which is a superhero film starring Vicky Kaushal, that will start shooting next year.

Veteran Marathi Director Shri Shivaji Lotan Patil said that his film’s subject is related to sound pollution and how it affects the surroundings especially children. “ People are getting affected by sound pollution, I felt someone needs to address the topic. As it is a sensitive topic to deal with, we had to be aware while writing and filming it,” he said.

Sharing the difficulties faced by regional film makers, Shri Patil said that regional cinema has its risk factor and film making there is a tough job. “ In Marathi industry you will get good content but nobody wants to fund them. If you don’t do good promotion, even the theatres won’t be interested to release the movie . So we are forced to put extra effort in making intelligent movies with less expense”, the director elaborated. Producer of  “Bhonga” Shri  Arun Hiraman Mahajan, and actors Shri Shripad Joshi, and Shri  Kapil Kamble also participated.

In a village, during the Azaan announcements on a loudspeaker, a nine-month-old child is unable to sleep and crises incessantly. His family realises that the child is suffering due to the loudspeaker’s noise. They request the Mosque’s muezzin to call Azaan without the loudspeaker or shift it, but he declines. One day the child dies, leaving the villagers shocked. His father blames the muezzin and asks him to stay away from the child’s funeral. Remorseful, the muezzin begins to give Azaan without a loudspeaker.

On September 18, 2016 four militants attacked Uri base camp, killing 19 Indian Soldiers. On September 29, 2016 the Indian Army retaliated by executing one of the most daring, strategic and covert operations ever – a surgical strike. This film directed by Aditya Dhar is based on a story inspired by those events. Divided over five chapters, the film depicts the surgical strike conducted by the Indian military against suspected militants in Pakistan occupied Kashmir (PoK) in 2016. The film features 11 tumultuous events over which the strike was carried out by the Indian Army’s Special Forces to avenge the killing of fellow army men.