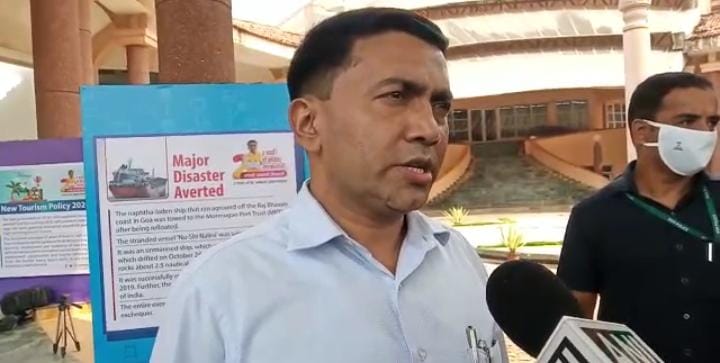 Panaji: Goa Chief Minister Pramod Sawant on Tuesday said that the state will extensively implement the drive to penalise people going around without wearing a mask in the state.

Sawant was speaking to reporters after chairing a meeting of the State Disaster Management Committee which was also attended by Health Minister Vishwajit Rane and State Chief Secretary Parimal Rai amongst others.

The chief minister took review of the COVID-19 situation in the state amidst rising number of positive cases.

Sawant said that the state will not go for lockdown or night curfew but would instead impose stricter guidelines to control spread of the virus.

He said that the state has already withdrawn section 144 of CrPC, which was imposed last week to curb the spread. “The section has been withdrawn but we have imposed stricter guidelines,” Sawant said.

The Chief Minister said that the gathering of more than 200 people in open spaces and 100 in closed spaces will be banned.

He said that State Police and District Administration officials will be intensifying their drive against those who are roaming without mask.

Sawant said that the state will not insist for covid-19 negative certificate from the people arriving in the state. “We advise people to avoid the gatherings and also get them tested and vaccinated,” he said.

The state has 25 private and 37 government centres were COVID-19 vaccines are available, he said adding that there is no dearth of vaccines as still 1.5 lakh of them are in stock of the state government.