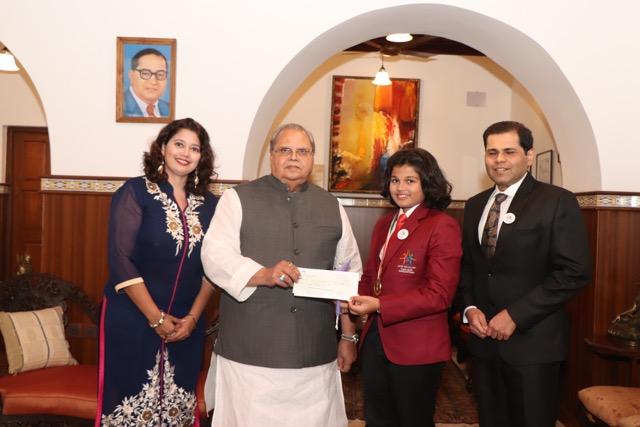 Panaji: Governor of Goa, Shri Satya Pal Malik today at Raj Bhavan felicitated Ms Pearl Colvalcar, a 13-year old  student of class eight, who was recently awarded the Pradhan Mantri Rashtriya Bal Puraskar by the President of India and was also felicitated by the Prime Minister of India.

Governor, Shri. Malik presented a cheque of Rs.50,000/- to Ms Pearl Colvalcar as a token of appreciation to her achievement.

Ms Pearl Colvalcar became  India’s youngest skiff sailor and she has been ranked at number one in the girls category. She has also won the “Youngest Sailor” Award at a sailing event held in Hyderabad.

After this spectacular achievement in the field of sailing, Ms Pearl is being known as the Pearl of Goa. Governor Shri. Malik appreciated her achievement and said that she has made her parents Dr. Milind Colvalcar and Dr. Tejashree Colvalcar proud, and has brought laurels to herself and the State of Goa. Governor also assured all support in her future endeavors.