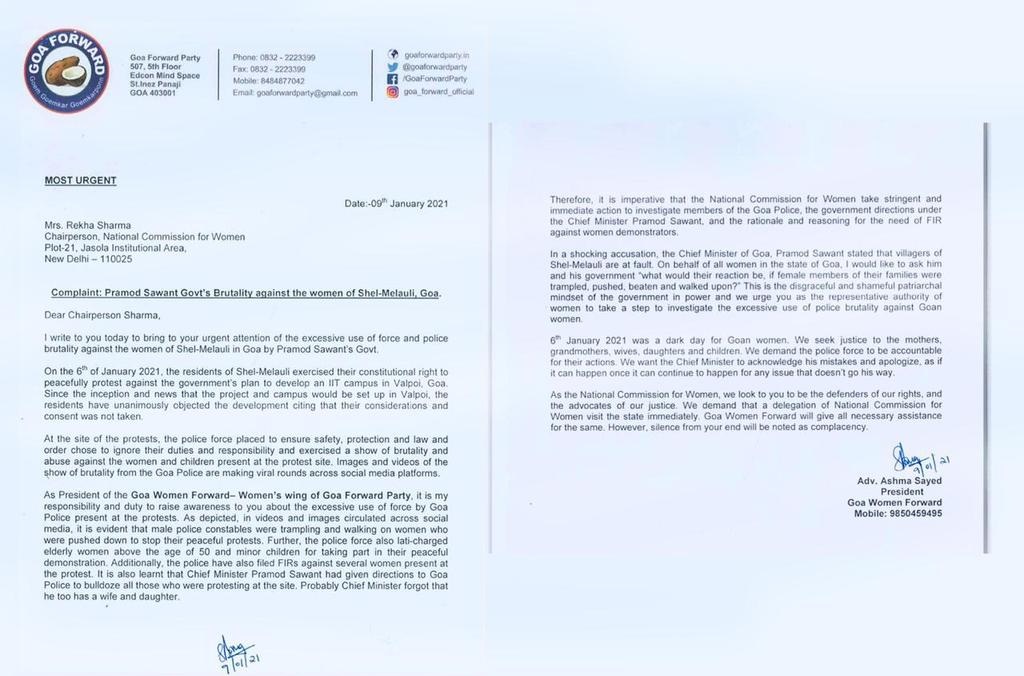 Panaji: A day after state women wing of Congress and Aam Aadmi Party (AAP) submitted memorandum to women comission in the state seeking justice for women who were attacked during protest, Goa Women Forward (GWF) has written to National Commission for Women (NCW) seeking their intervention to this matter.
Addressing the letter to NCW chairperson Rekha Sharma, GWF president Ashma Sayed stated, “I write to you today to bring to your urgent attention of the excessive use of force and police brutality against the women of Shel-Melauli in Goa by Pramod Sawant’s Government. On the 6 January 2021, the residents of Shel-Melauli exercised their constitutional right to peacefully protest against the government’s plan to develop an IIT campus in Valpoi, Goa. Since the inception and news that the project and campus would be set up in Valpoi, the residents have unanimously objected the development citing that their considerations and consent was not taken.”
Explaining the scenario GWF stated, “At the site of the protests, the police force placed to ensure safety, protection and law and order chose to ignore their duties and responsibility and exercised a show of brutality and abuse against the women and children present at the protest site. Images and videos of the show of brutality from the Goa Police are making viral rounds across social media platforms.”
“As President of the Goa Women Forward– Women’s wing of Goa Forward Party, it is my responsibility and duty to raise awareness to you about the excessive use of force by Goa Police present at the protests. As depicted, in videos and images circulated across social media, it is evident that male police constables were trampling and walking on women who were pushed down to stop their peaceful protests. Further, the police force also lati-charged elderly women above the age of 50 and minor children for taking part in their peaceful demonstration. Additionally, the police have also filed FIRs against several women present at the protest. It is also learnt that Chief Minister Pramod Sawant had given directions to Goa Police to bulldoze all those who were protesting at the site. Probably Chief Minister forgot that he too has a wife and daughter,” Sayed stated.
“Therefore, it is imperative that the National Commission for Women take stringent and immediate action to investigate members of the Goa Police, the government directions under the Chief Minister Pramod Sawant, and the rationale and reasoning for the need of FIR against women demonstrators. In a shocking accusation, the Chief Minister of Goa, Pramod Sawant stated that villagers of Shel-Melauli are at fault. On behalf of all women in the state of Goa, I would like to ask him and his government “what would their reaction be, if female members of their families were trampled, pushed, beaten and walked upon?” This is the disgraceful and shameful patriarchal mindset of the government in power and we urge you as the representative authority of women to take a step to investigate the excessive use of police brutality against Goan women,” the letter stated.
“6th January 2021 was a dark day for Goan women. We seek justice to the mothers, grandmothers, wives, daughters and children. We demand the police force to be accountable for their actions. We want the Chief Minister to acknowledge his mistakes and apologize, as if it can happen once it can continue to happen for any issue that doesn’t go his way,” GWF wrote.
As the National Commission for Women, we look to you to be the defenders of our rights, and the advocates of our justice. We demand that a delegation of National Commission for Women visit the state immediately. Goa Women Forward will give all necessary assistance for the same. However, silence from your end will be noted as complacency.