Goa market sells Onions at highest price in the country, it’s 110 per kg 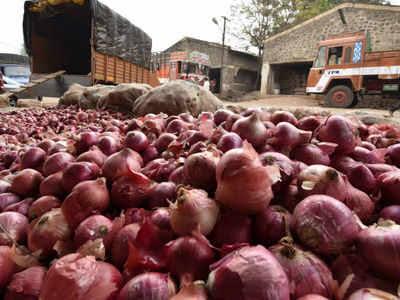 Panaji: Onion prices remain high across the major cities of the country as the average selling price ruled at Rs 70 per kg on Thursday while the maximum rate of Rs 110 per kg was recorded in Panaji, according to official data.

The lowest price of Rs 38 per kg of the bulb was reported from Gwalior in Madhya Pradesh, the Consumer Affairs Ministry data showed.

Among the four metros, onion is being sold at Rs 76 per kg in the national capital, Rs 92 in Mumbai, Rs 100 per kg in Kolkata and Rs 80 per kg in Chennai.

Interestingly, a pricey onion seems to be catching the attention of thieves as an employee of a vegetable vendor in Surat said that someone stole 250 kg of the bulb worth Rs 25,000 from their shop in the early hours of the day.

On Wednesday, the government extended prohibitions on traders from the stocking of edible bulb across the country for an indefinite period.

The stock holding limit was imposed in September. At present, retailers can stock onion only up to 100 quintals and wholesale traders are allowed to keep up to 500 quintals.

Food and Consumer Affairs Minister Ram Vilas Paswan on Wednesday had asserted that the government was making maximum efforts to control prices.

Besides stock holding limit, he said, the Centre has banned exports of onion and importing 1.2 lakh tonnes to control prices.

State-owned MMTC has informed that the first shipment of onions from Egypt would arrive in the second week of December. The public sector trading firm has contracted imports of 6,090 tonnes of onions.

Expressing concern over the price rise, Paswan had said the situation is being closely monitored by a team of five Union ministers chaired by Home Minister Amit Shah. Finance minister, agriculture minister and road transport minister are also members of the group of ministers.

The group of ministers has already held one meeting and another one will be held soon, he said.

On November 19, Paswan had said onion production in Kharif and late-Kharif seasons of 2019-20 is estimated to fall 26 per cent to 5.2 million tonnes due to a delayed monsoon and then excessive rains in key growing areas.