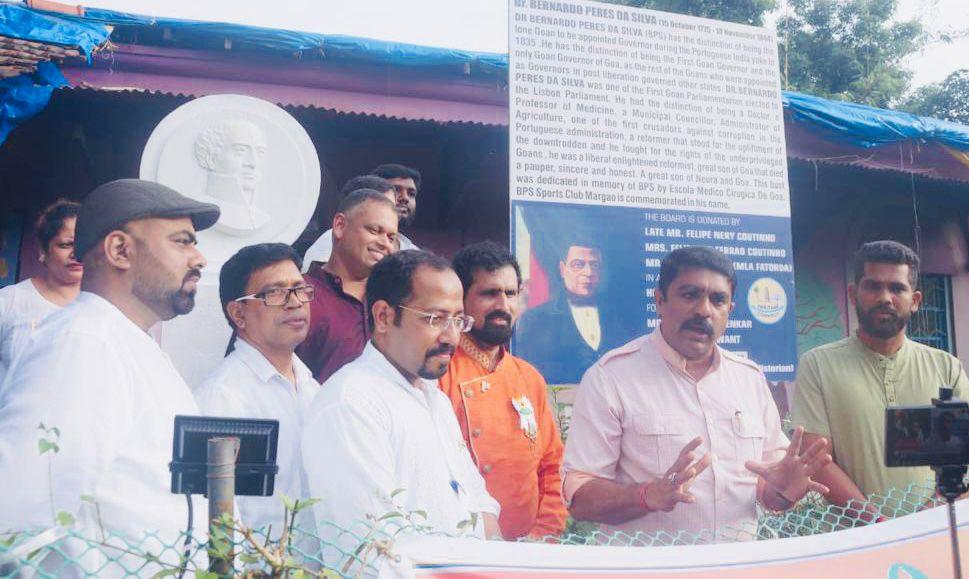 Panaji: – Goa Forward President Vijai Sardesai inaugurated bust of Bernardo Prered D’Silva (The only native Goan to be appointed as Governor of Portuguese in India and also a representative in the Portuguese Parliament) at Neura. While speaking to reporters on the occasion GFP President said that the Goa Chief minister Pramod Sawant’s and the state BJP’s repeated comment that the Portuguese stole Goa’s wealth is a very subjective, simplistic and personalised reading of history. Historical events have to be handled and interpreted with clarity and objectivity especially the Portuguese rule in Goa because of its intricacy that span five centuries.
Sardesai said that Goa’s real wealth is its strategic location which the Portuguese saw as the site of a perfect port-city for its naval and maritime ambitions for all of Asia. it was this locational advantage that attracted, before the Portuguese, the Vijayanagara Empire and the Bijapur Sultanate, and other empires and kingdoms before them. GFP President said that Goa is rich also because of its natural resources that have sustained life for thousands of years. To declare that all of Goa’s wealth is stolen by the Portuguese is to be blind to the real wealth of Goa which is Goa itself: Its rivers, mountains, forests, its flora and fauna, and its privileged position in the Arabian Sea.
Vijai said that this misdirection on the part of the chief minister is an uneducated attempt to trivialise and divert attention from the massive loot of Goa’s intrinsic wealth with his misguided development plans which are not even development because they neither benefit Goa or Goans. The real purpose of this latest narrative is much more malicious and corrupt. By showing that Goa is devoid of its riches, the BJP plans to privatise its rivers, hills, forests and ports by favouring its outsider cronies, imposing them on Goa, and allowing them a freehand to really steal our wealth, marginalising local Goemkars.

Goa’s wealth is being stolen as we speak, and it’s not the Portuguese but by BJP’s well placed out of the state allies with the full connivance of the local leaders. Historian Prajal Sakardhande, Yogesh Nagvenkar, RGP MLA Viresh Borkar, Former Mandur Sarpanch Ajit Bacal were present on the occasion.