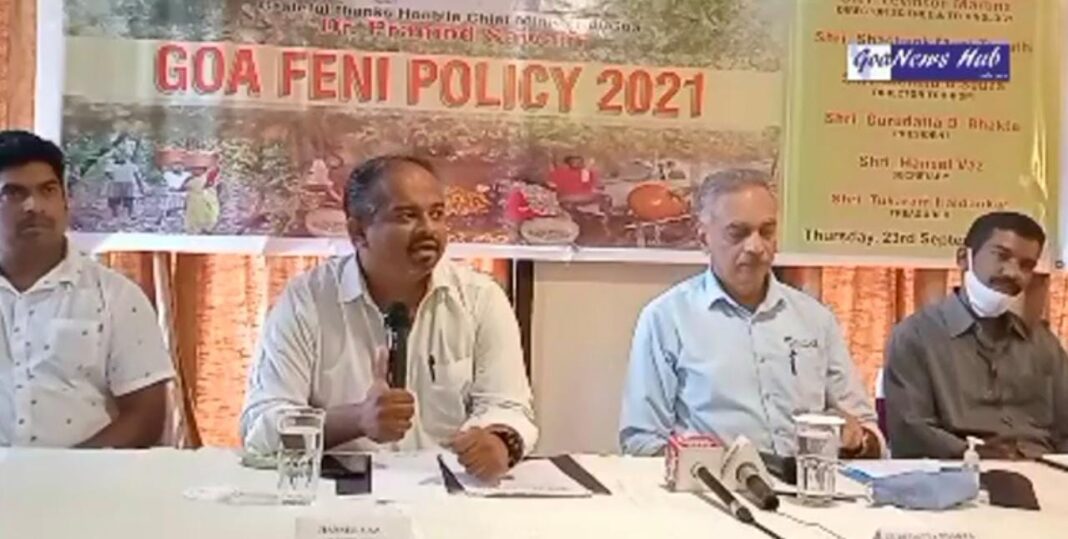 Panaji : The Goa Cashew Feni Distillers and Bottlers Association (GCIDBA) has hailed the notification of the Goa Feni Policy, 2021
Speaking at the media conference held on Thursday. Gurudatta Bhakta. president, GCFDBA said, “On behalf of the stakeholders of the cashew feni industry we would like to express our gratitude to the chief minister. Dr Pramod Sawant for initiating the notification of the “Goa Feni Policy, 2021 The notification of the feni policy in the state will lead to rapid intervention and important improvements which will positively impact the feni industry as a whole.”
Bhakta also expressed his gratitude to the  late chief minister Manohar Parrikar for initiating the ‘Feni Policy and former CM Laxmikant Parsekar for giving feni the status of Heritage Spirit of Goa
According to Bhakta, the GCFDBA had achieved success in creating awareness and raising standards for the betterment of cashew feni in Goa and worldwide. Bhakta complimented commissioner of excise, Shashank Tripathi. for paving the path for stakeholders to chalk out a roadmap for feni and former commissioner of excise and Menino D’Souza for initiating this process.
Bhakta thanked the team of Levisions Martins and Deepak Parab of the department of science and technology for initiating a geographical indication (GI) status for cashew feni. He said, “The GI is an intellectual property right (IPR) provided by the Government of India to protect cashew feni and its stakeholders from any attempt to infringe appropriately or dilute the status of cashew feni as the Heritage Drink of Goa.”
Speaking on the occasion, Hansel Vaz, secretary, GCFDBA said that the feni industry directly injected revenue to all of Goa’s rural and marginal farmers and hinterland communities who operated without any government support or subsidy -The present prevailing system is unique to the world and exclusive to Goa and allows communities to themselves remain self-sufficient by adding value, skill upgrade and reducing farm waste through cashew distillation. This approach is in sync with the prime minister’s philosophy of an ‘Aatmanirbhar Bharat (self-reliant India), Vaz said
Tukaram Haldankar, treasurer. GCFDBA sought the support of the state to help in exporting Goan cashew feni to other countries and states within India. The state government must create a sponsored initiative to promote feni as the state drink of Goa. We want to take our Goan fent to the world.,Haldankar said