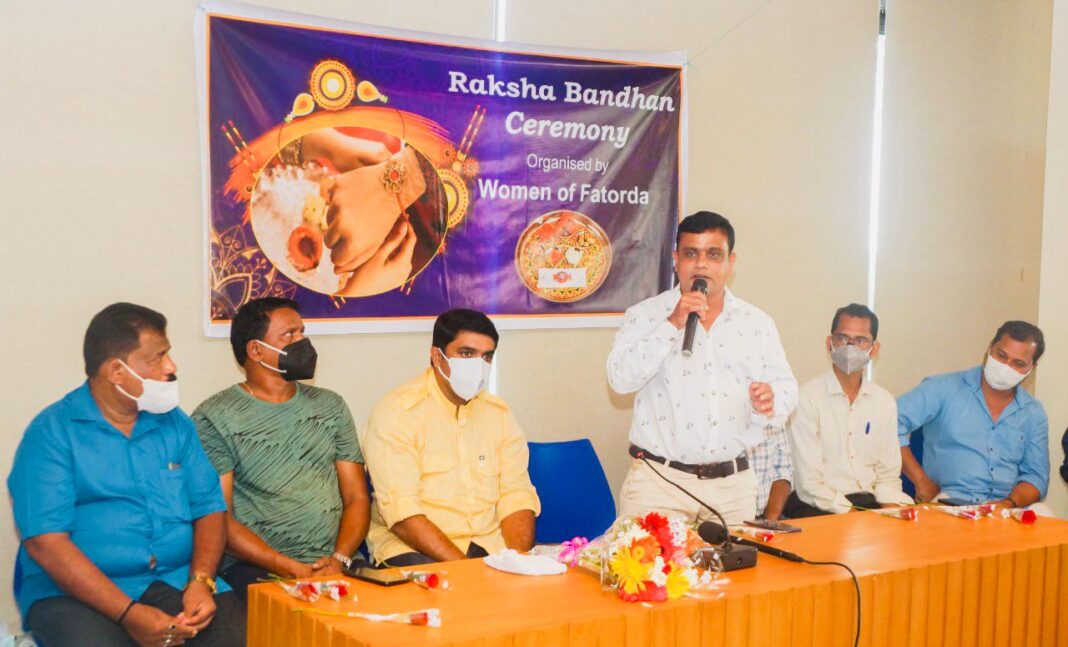 Speaking at the Raksha Bandhan ceremony hosted by We For Fatorda, Fatorda MLA Vijai Sardesai said the the fast tracked and participatory development that Fatorda has undertaken will make Goa more progressive. He attended the function alongside the chairperson of MMC Lyndon Peireira, Fatorda Forward councillors and prominent social worker Ramdas Hazare.

Women from all faiths tied Rakhis on Sardesai, Lyndon Peireira, Ramdas Hazare and others. “This function today shows Fatorda’s inclusivity and tolerance of all faiths” said The Goa Forward President highlighting the many successes of Fatorda. He noted that women have always been the centre and the driving force of change in the constituency. Sardesai thanked the women of Fatorda for all their support and sacrifice especially during the difficult COVID-19 lockdown and said, “even though times were so difficult, the women of Fatorda remained firm, resilient and empowered. You are the difference.”

Also speaking at the event was former councillor and prominent social worker Ramdas Hazare who praised the party’s leadership and Vijai Sardesai, thanking him for making Fatorda a model constituency for Goa to emulate.

Ramdas Hazare stressed that he has never left Vijai and has always been present for Raksha Bandhan every year, and remains close to the GFP family. He added: “It was Vijai who insisted that I should be back actively for all the work we have done to make Fatorda a unique and great constituency in Goa.

He also noted that in his native Sankhalim, there has been no development for the residents or jobs for the youth. He requested Vijai to promise a priority for Goans in jobs as a manifesto guarantee.

Hazare urged the people and the women of Fatorda to make use of the opportunity provided by the Goa Forward Party and “step forward to achieve their best in life.” At the event, Vijai Sardesai declared new schemes to empower women stating that these will be the crux of party’s vision and mission.

Sardesai said that new food courts and public centers will be completely run by women, lauding their competence and capability. He added that on 02nd October 2021, the party will launch the e-cart at Opinion Poll square and women-run food court highlighting that “woman in Goa should always move Forward!”

The GFP Chief stated that the party will ensure that all women are safe in the state and that the “negligence and incompetence of the BJP on women safety needs to be brought to an end urgently.” Sardesai made a note that “Goa needs to reposition it’s image from being a sin city from where anything goes, to a safe family destination where we can promote our good Goan culture and values.

Previous articleSt. Andre lagging behind in development, we will give constituency centric manifesto: Sardesai
Next article#FreeMedicalCamp for the constituents of Penha De Franca, Socorro, and Salvador Do Mundo