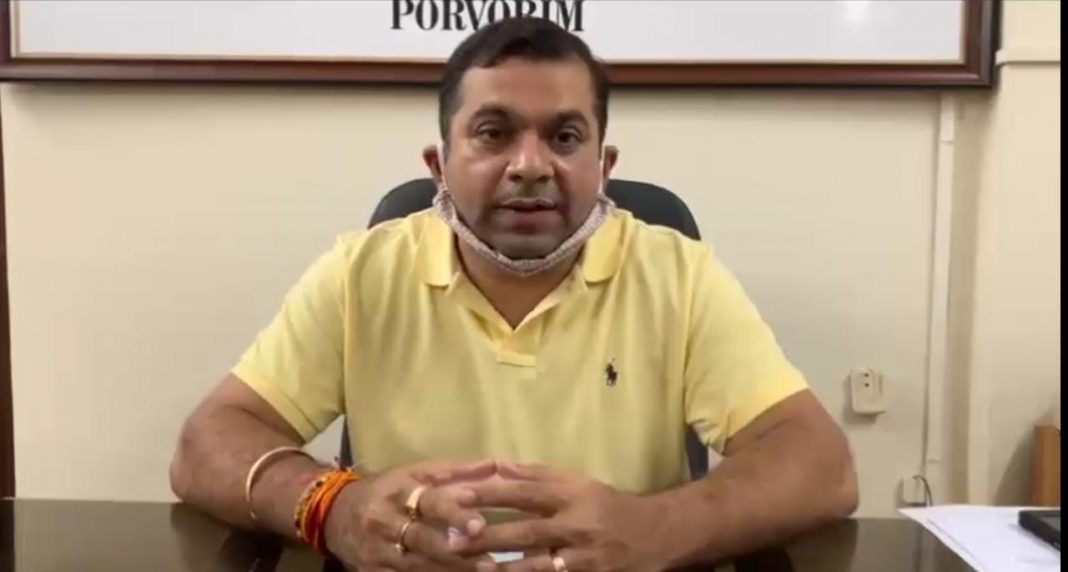 Porvorim: Independent MLA Rohan Khaunte has said that the action by Enforcement Directorate against Sarpanch Sandeep Vazarkar for alleged involvement in land scam is just another glaring issue that exposes the Corrupt practices of our CM Dr.Pramod Sawant.

“It’s one more of the many examples of his Corruption that I have been vociferous about…And yet there will still be many who oppose my crusade against corruption but I will continue to stand by my principles and stand up for Goa and Goans come what may,” Khaunte said.

“Everyone would recall that I was the first to raise my voice and initiate punitive measures against the accused Sandeep Vazarkar in the Serula issue,” he said.

“And it’s at the same time that the CM used him to gain back door entry into Porvorim constituency by welcoming a tainted entity into the BJP just to gain one-upmanship in Porvorim constituency but this move was also one of those forewarnings that should have given an insight about the corrupt ambitions of Dr Pramod Sawant,” the MLA added.

“On one hand the CM had promised the ongoing assembly at that time that there will be a full scale investigation into all Communidade land grabbing and in the same stance, this two faced epitome of Corruption welcomed Sandeep Vazarkar with great fanfare into the BJP as the CM wanted such money laundering experts with him to further his true interests of making money through whatever means possible,” he said.

Khaunte added “How he’s going to justify the fact that the NOC was issued against norms and that there was no State approval for the land transfer? Or is it that when the CM of the State is standing strongly with the accused, why’s the need for State approval.”

“I wonder what is the reason why he’s not resigning at least on moral grounds considering his open liaison with the ED accused Vazarkar.”

“In school we had studied about King Midas who turned everything he touched into gold..,Our Dr CM turns everything he touches into Oppurtunities of Corruption, even a worldwide pandemic like Corona has proved to be a golden opportunity for corruption to him,” he commented.

Khaunte said that now that the cat is out of the bag with an authority like ED certifying the scam I would like to ask our CM as to Why he always supports those who have been openly a part of all illegal activities be it land grabbing, money laundering, mining, labor scam or quarantine tourism, it seems that he’s not the Head of State but the “Head of State Sponsored Corruption”

“It’s utter shame for Goans to be lead by such a CM who’s every action reeks of corruption..,

Perhaps we should all appreciate that Lokayukta has already said.” “Only God can save Goa from this  Government “ and now the ED too validates the fact that this CM s Governance is Of the Corrupt, For the Corrupt and run By the Head of Corruption,” he added.

“Truly, only God can save Goa but then God work’s through us so it’s time for us to decide whether we want this Epitome of Corruption to continue as CM of Goa,” Khaunte said.