Covid-19 cases in decreasing trend in the State. Is a second wave on way? BY ANWESHA GHOSH

Panaji: With Unlock 5 being implemented, almost every sector resuming to normalcy after the lockdown due to the coronavirus pandemic. While reopening of the tourism sector and other industrial was seen as a threat for spike of cases. However, call it fortunately, the cases in Goa has seen a decreasing trend in the past few weeks. 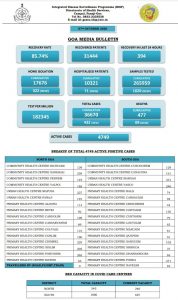 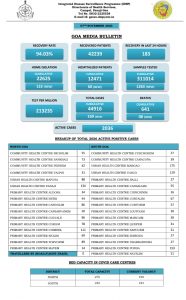 Commenting on this decrease in trend of coronavirus in the state despite reopening of the tourist sector, state epidemiologist Dr Utkarsh Betodkar told Goa News Hub, “The maximum cases that we witness is from our population. Maximum number of areas has already been infected and the infection is going from that area now.”

Talking about whether there will be a second spike, Dr Betodkar said that it is hard to predict whether there will a second wave and if at all there is what will be the intensity of it. “With schools and other sectors reopening cases might increase but if people take proper precautions it can be controlled.”

Speaking about the testing pattern in the state Dr Betodkar said, “In the last two three months testing has also been decreased. Testing each and every person increased the load on the system, people who actually needed testing were delayed thus, now only those who are symptomatic or themselves want to get tested are getting tested.”

“There has been a downwards trend and hopefully this remains a constant. 100-150 cases on an average is fine as zero cases might make people feel that the infection is gone but eventually may lead to spike in cases. The positivity rate has also decreased and hospital beds are also going vacant which is a good sign,” renowned oncologist Dr Shekhar Salkar said.

Dr Salkar further reckoned that December could be a crucial period for Goa as many return back to their home for New Year celebrations and also a large number of tourist footfall. “Goan people living abroad usually come to their home during December for Christmas and New Year celebrations. The state also attracts a lot of tourists during this time. So, it can see a spike, however, the intensity is unpredictable.”

Emphasizing on how this downward trend can be maintained avoiding any second wave Dr Salkar said, “The government has done whatever it could, providing all facilities, initiating all precautionary measures. Now it is on the people how they care of themselves and concern about their safety following all SOPs. Things have to fall back in place and schools and industries have to resume but the norms of social distancing and wearing masks must be followed.”