Committed to solves issues of Sanguemkars:CM 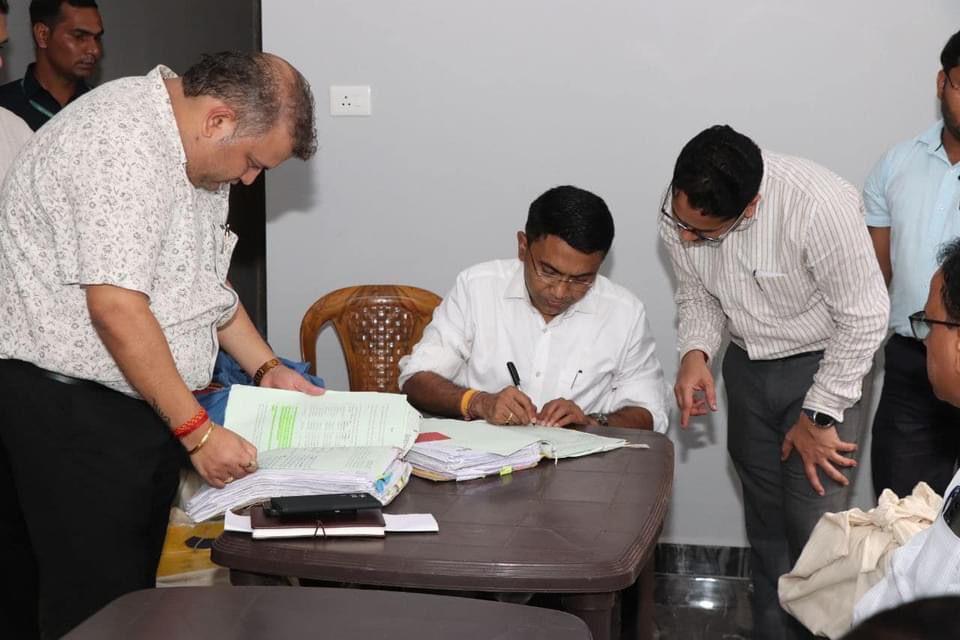 He was speaking after inaugurating the second edition of flagship programme of the Government Sarkar Tumchya Dari – Government at your Doorsteps for Sanguem Constituency at Government High School, Netravali, today.

Further speaking Dr Sawant said, Government is always with the people of Sanguem and will see that no injustice is done with this constituency with regards to overall development and all efforts will be made to ensure that this constituency comes into the mainstream of development. He said all Taluka Officers will be deputed at Taluka level so that people don’t suffer. Sanguem Constituency comprises tribal people and the Government is committed to see that benefits of all the schemes reach them. 10,000 Forest Rights Cases and 136 people have issued sanads he informed. Other FRC and Revenue land cases will be put on fast track, he added.

Government is worried about every person of the State and treats every individual’s issue as its own, he said. Sarkar Tumchya Dari was not just an election stunt and that is why it will be continued for five years, he said. It is an initiative to provide maximum administrative services as well as schemes and facilities to the people at their doorstep, he pointed.

Dr Sawant said Government is of the opinion that every individual should get electricity, toilet, water, own house as well as financial and social security. Every Goan should be self sufficient and for that united efforts of Government, bureaucracy and public are required. People should also come forward to derive benefits and be self-sufficient. Government is making every effort to provide employment to its people in their constituency itself by way of self employment, he said and appealed to the people to take benefit of 121 schemes which are available online. Internet connectivity problems will be solved soon, he said.

Minister for Social Welfare, Shri Subhash Phaldessai said Government is working on the concept of serving the last citizen of the society and added that organising Sarkar Tumchya Dari in Sanguem Constituency proves it. He said the Government ensured that all requisite facilities reached the people during the difficult COVID times.

He said Sanguem Constituency is a geographically vast constituency which is mostly in villages and development cannot be seen adding that needs of the people are increasing which will be catered by the Government he said. Electricity, Mobile Network, drinking water, educational infrastructure, road network, other infrastructure, forest right issue, issues of the people affected by Salaulim Dam are the major issues which are faced by the people and every effort is made to resolve them, he remarked.

Shri Phaldessai informed that the Botanical Garden at Salaulim Dam will be developed at the cost of 35 crores under eco tourism. Also 40 cottages will be coming in the constituency to provide facilities to the tourists. Around 400 people will get employment in the next year through different projects which are in the pipeline, he said.