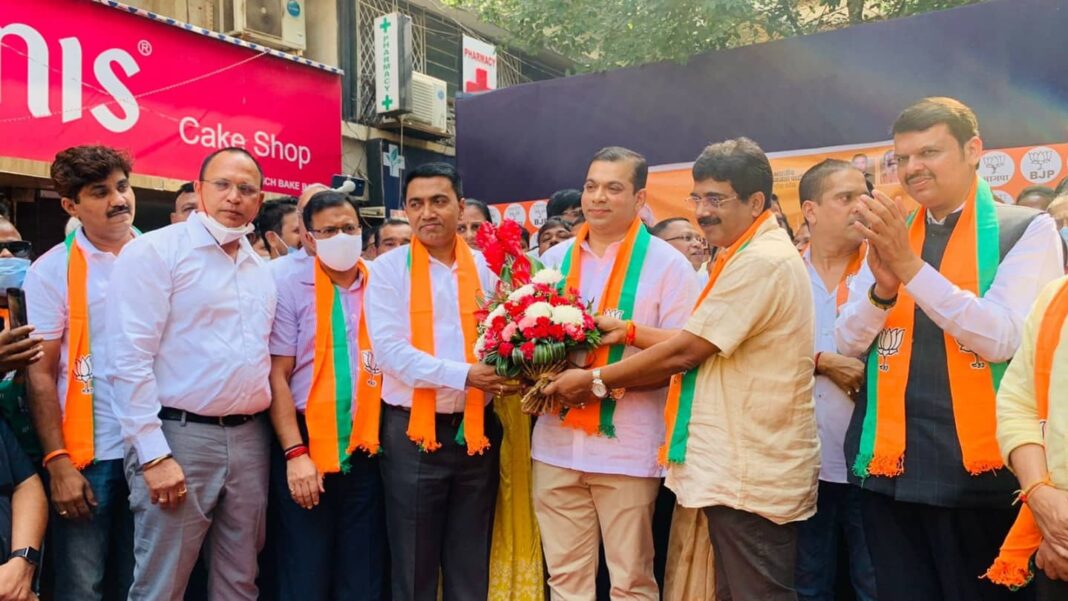 During his induction, Khaunte was labeled as constructive opposition in the Assembly by Sawant, who said that he has always raised issued for the welfare of Goa and Goans on the floor of the House.

Fadanavis narrated how a call from central leadership prompted him to convince Khaunte to join the BJP. He said that with the induction of Khaunte, entire “efficiency” had come to the side of BJP.

“We had our efficient leaders in the party. Khaunte was the only leader in opposition who was efficient. With his induction, we have all the efficiency by our side,” the former Maharashtra chief minister said.

Before joining BJP, Khaunte along with his brother Rajesh Khaunte took blessings of Goddess Mahalaxmi in Panaji and later walked to the BJP office along with his hundreds of supporters.

Fadanavis said that it a moment of joy for BJP as Khaunte becomes a part of it. He said that during his initial discussions with Khaunte, he agreed that there is a deficit of leadership in the country and BJP is the only party which has leaders.

Fadanavis said that Khaunte has always played “people’s politics” due to which he won from Porvorim constituency for two terms as an Independent. He said that it is ample clear that BJP will form the next government in Goa with majority seats.

Chief minister Pramod Sawant said that he always considered Khaunte as constructive opposition in the Assembly which is required for the democracy to survive and also for the welfare of the state.

Sawant recalled the reforms implemented by Khaunte during his tenure as Information Technology, Revenue and Labour and Employment minister, which are still being continued by current government.

He said that the BJP can add two more seats to its tally of 22 in 22 after the induction of Khaunte.

Speaking during the induction, Khaunte said that he took the decision to join BJP only after consulting the party workers, Zilla panchayat members, core groups  and well wishers, who gave him go ahead.

“I have always taken my decisions in consultation with the party workers and well wishers and I will continue doing so even in future,” he said.

Khaunte said that during his total tenure, he spent seven and half years as an Opposition member taking up the issues that are relevant for the state and also for the constituency.

He said that he tried to bring in several reforms during his two and half year long tenure in Parrikar and also Sawant led governments.

“I  have always taken up the issues which are concerning the common people,” he added.

Khaunte said that the current trend in politics has prompted the people to come together. “There are parties from outside Goa who are giving slogans like Khel Zhatlo. We are not toys to play with, we will not allow Goans to be treated like toys,” he said.

The ex-Porvorim MLA said that he nurtured differences with the chief minister but they were towards creating positive changes in Goa. “The political and ideological differences makes democracy vibrant,” Khaunte said.

After the induction, Khaunte left for Delhi accompanied by Fadanavis where he is expected to meet senior BJP leaders.

Previous articleBig Boost to BJP with Rohan Khaunte joining the party ahead of polls
Next articleI was feeling suffocated in BJP: Alina Saldanha