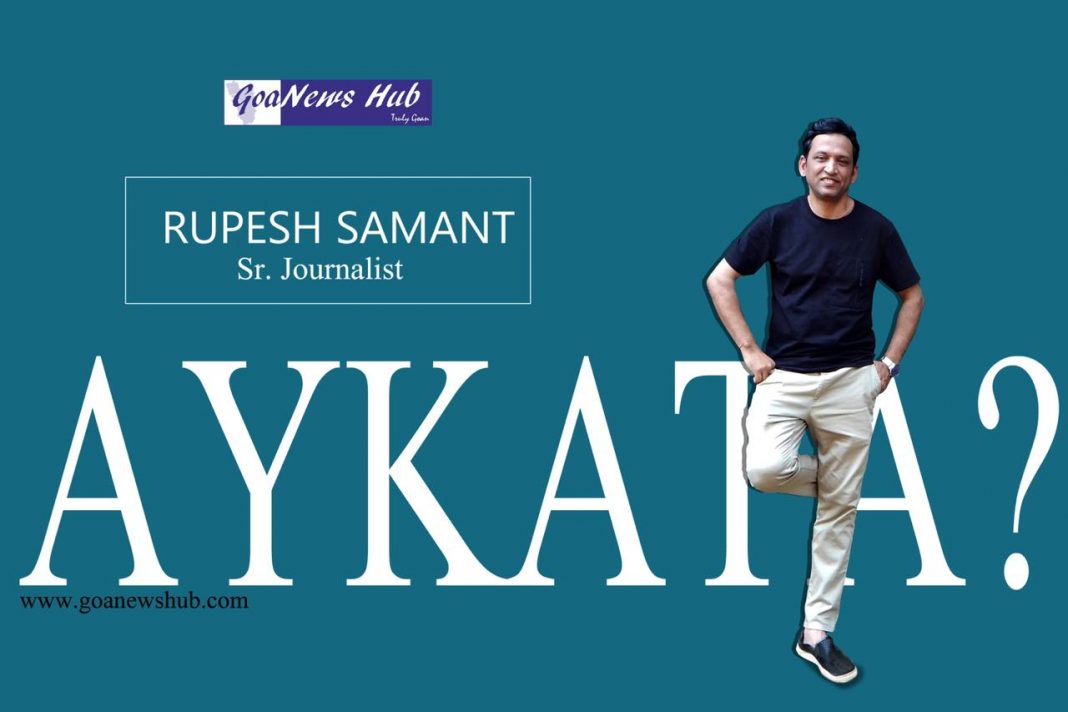 Goa’s political canvas seems to be filled with utter confusion ahead of the crucial 2022 polls. Right from the rumour –cum-news of BJP changing its chief minister candidate to Goa Forward Party’s possible marriage with Congress and the expected political revolution by Aam Admi Party (AAP), the things are right now in utter uncertainty.
As we are left with seven months for the elections, the political equations are still murkier. The internal sources in BJP have made two things clear so far. First, the Chief Minister will not be changed and secondly, they will not go for an alliance with MGP. But at the same time, some of the political analysts have gut feeling that BJP will go with MGP at the last minute as the Dhavalikar-led party is a natural ally for the Tanavade-led outfit.
Goa Forward Party has been clear with their intentions of forming Team Goa. During my conversations with GFP Chief Vijai Sardesai, he was counting on Congress and NCP for Team Goa. Sardesai wants an alliance to be announced ASAP so that the united Team Goa can chart out its future.
On Wednesday, GFP Chief was heard on a local television stating that he is not worried about the fate of his party but is insisting for the larger alliance to defeat BJP in a total certainty.
There is no doubt that AAP is growing in the state and is turning from “Delhi party” into “Goa party” with several Goan politicians speaking from their platform. The leaders like Elvis Gomes, Pradeep Padgaonkar, Pradeep Ghadi Amonkar are a thing of the past for AAP who are now replaced with the leaders like Rahul Mhambre, Pratima Coutinho, Sandesh Telekar, Suresh Tilve and others. Valmiki Naik remains to be in the party too.
BJP is waiting and watching the political happenings on the opposition side with AAP taking Congress head-on , hinting that it will eat into the votes of the grand old party. The political scene is slowly turning into BJP versus AAP with Saffron party leaders criticising Delhi Chief Minister Arvind Kejriwal’s announcements on ‘free electricity’. Debates between AAP and BJP are becoming the order of the day, slowly pushing Congress to a corner.
The political analysis of Goa’s politics in future will depend entirely on two factors – alliances and what will happen to 10 Congress-turned-BJP MLAs.
While the internal sources in BJP confirm that the party will give tickets to all the 10 MLAs or support them as Independent candidates, the decision to accept the support or not will be entirely on these MLAs, who are currently trying to understand the pulse of the people.
Besides these 10, there are four more – – Subhash Shirodkar, Dayanand Sopte , Deepak Pauskar and Manohar Ajgaonkar, who had switched as a prelude to the bigger en-mass transfer.
Considering the hypothetical situation wherein BJP-MGP goes for alliance, one has to see whether Dhavalikar-led party will allow Pauskar and Ajgaonkar to be given BJP ticket or as Sudin Dhavalikar said they should form “makadudya party”.
The crucial question also arises whether, without Congress, will GFP go for election alone or will forge alliance with parties like AAP and NCP.
The entire campaign of the parties would be based on an assurance that they will form the next government. None of the party or alliance, who is contesting less than 21 seats can assure to form the government. In such a situation, the alliance seems to be an inevitable political move for the parties, who are eying to be in power in 2022.