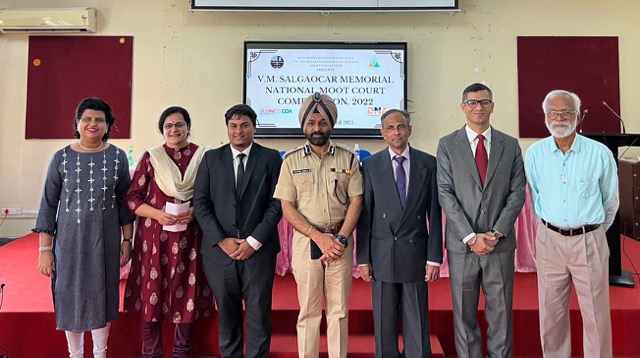 Miramar: On 22nd of April, 2022, the V.M. SALGAOCAR MEMORIAL NATIONAL MOOT COURT COMPETITION 2022 was officially declared open. The event was inaugurated in the presence of the esteemed Chief Guest, Shri. Jaspal Singh, Director General of Police, Government of Goa.

This event took place over there days from 22nd to 24th April 2022 through the virtual mode. A total of 14 Law Colleges from across India competed for the prestigious Competition through five competition rounds spread over two days. A total of 29 esteemed Advocates from the State of Goa, judged the event.

The event was conducted with the involvement of the faculty and 60 student volunteers. The program was compared for both days by Ms. Diya Kamat, Mr. Ishan Kenkre, Ms. Dimple Purohit and Mr.Raj Chodankar.