Vishwajit Rane should answer this! Food on stretcher meant for patients, chapattis in bucket used for bathing in GMC 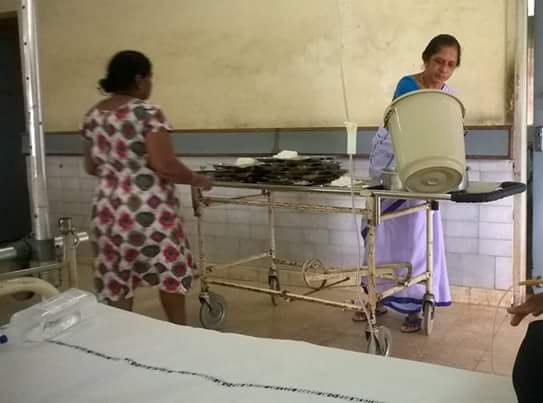 Bambolim: While food safety is gaining increasing attention in the state after formalin in fish issue, Health Minister Vishwajit Rane is in the dock for the way unhygienic food is served to the patients of Goa Medical College and Hospital.

Food and Drugs Administration and Health, both are the departments, which are portfolios of Vishwajit Rane.

Social media is currently debating the post by social activist Sudip Dalvi where he has caught GMCH staff carrying food for patients on the same stretcher which is used for sick patients.

Incidently, FDA has not reacted to this picture and no authority has conducted the inspection of the food that is supplied to the patients by the GMCH.

Social activist Sudip Dalvi in his post on the social media has exposed complete inhuman treatment given to the patients.

Pointing out to the incident on July 18 at Orthopaedic ward, Dalvi has said that GMCH is perhaps the only hospital in the world where the food for patients is brought upon a rolling stretcher and chapattis in a bucket.

This is what he has posted on the Facebook: Yes. Stretcher on which seriously sick patients are moved in sleeping position from one place to the other and bucket which is used for bathing and washing clothes.

This is abuse of human rights, apathy towards patients’ health, negation of hygiene and insult of common sense.

Is this what Goa, for for that matter any human society deserves anywhere in the world? Food on stretcher? Chapatis in bucket? Already we are dealing with formalin in fish. Don’t our politicians have an iota of regard for citizens’ health?

Vishwajit Rane, forget about resigning. Now its time to seriously think about committing suicide, not for you but for us.