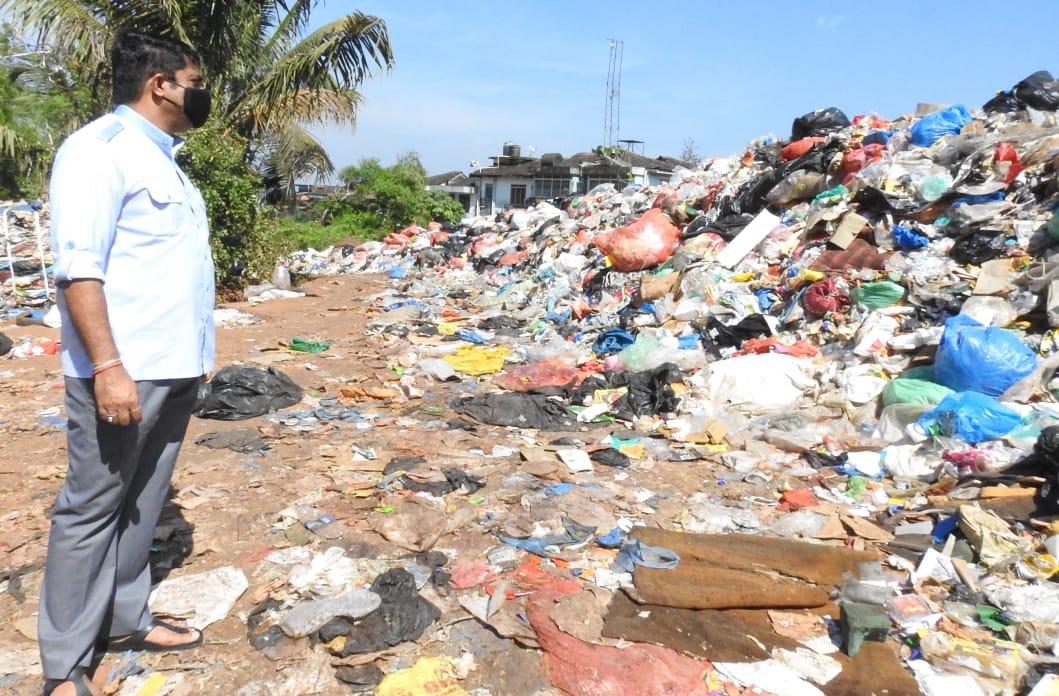 Fatorda: Fatorda MLA Vijai Sardesai lambasted the state and municipal administration for the pathetic state of the Sonsoddo garbage dump. He paid a surprise visit to the dump site on Friday after receiving reports that no work is being carried out there and that even the treatment of daily garbage was at a standstill.

Addressing the media later, Sardesai remarked ‘the bio-remediation of the legacy dump, which was being done by Hindustan Waste Treatment Pvt Ltd (HWTPL) till the last rains, has not commenced. To add to this, the 35 tons of wet waste generated everyday is not even being touched, let alone treated, and baling of dry waste has also come to a full stop. This situation is the worst I have seen over the last 10 years. The size of the dump is the largest I have seen and nobody seems to be worried about the piling of garbage’.

Sardesai was accompanied by the Margao Chief Officer Agnelo Fernandes, whom he directed to take immediate action regarding the baling operations. The Fatorda MLA also spoke to Waste Management Minister Michael Lobo and extracted a commitment from him to start the bio-remediation work and treatment of the daily wet waste by 19th December. Lobo assured Sardesai that, on 19th December both operations would start. HWTPL’s representative Shri Patil, who was present at the site, was accordingly instructed.

The Fatorda MLA informed the reporters present that HWTPL would start the bio-remediation process for the old dump as before and, in addition, would shift one wet waste treatment plant to Sonsoddo from Saligao before 19th December to treat the daily intake of 35 tons of wet waste. He said that this would be a temporary arrangement till the new bio-methanation plants are set up, as the tendering process would take some time. ‘But we cannot wait till then’, he said, ‘and that is why I have forced Michael to make this arrangement’.

‘This is not an issue that has started during my tenure as MLA’, Sardesai claimed. ‘It is a legacy issue. We are actually clearing the mess made by others before us. In any case, we will solve the issue and I am sure the MMC CO, who is a very proactive government servant, will take all steps necessary to do so. This Liberation Day – 19th December, the process of the liberation of Sonsoddo will begin and I will personally ensure that it is done. We will liberate Sonsoddo from both the daily wet waste and the legacy waste’.