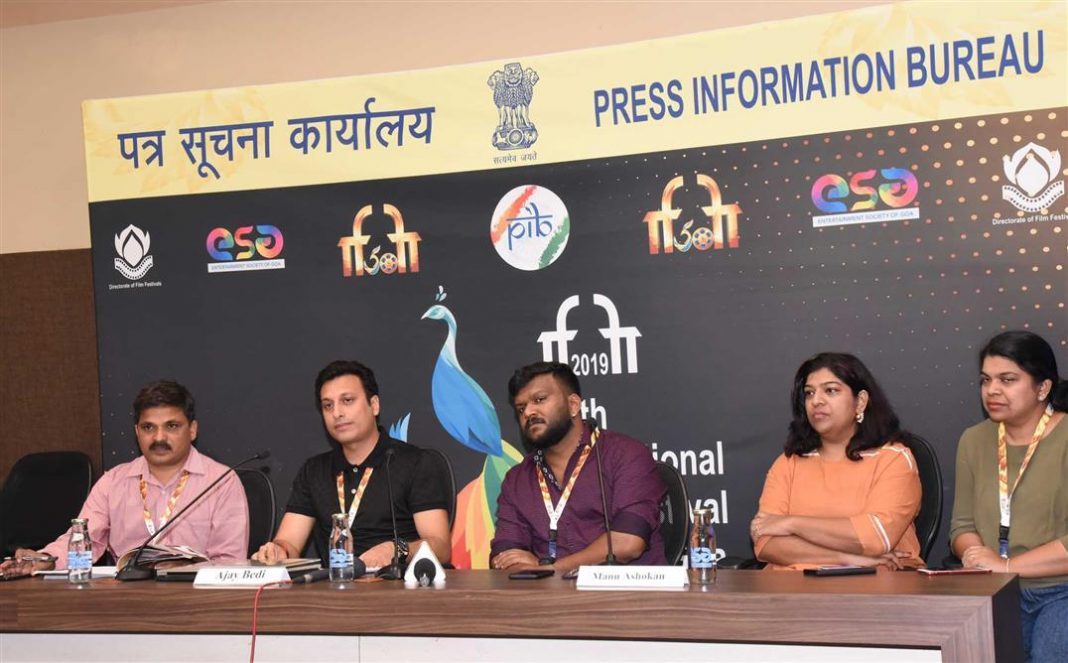 Those who are subjected to acid attack are often portrayed as victims by society and media. But there are many who fights the trauma associated with acid attack and grab back their freedom like a phoenix rising from its ashes. Survivors will be the apt term for describing them. ‘Uyare’ a Malayalam movie at IFFI’s Indian Panorama session is an uplifting film about an acid attack survivor who triumphs despite the odds stacked up against her.

Director of ‘Uyare’ Shri Manu Ashokan and producers- Smt Shenuga and Smt Sherga participated in a press conference to share the story and contemporary relevance of their socially relevant movie.  Director of the non-feature film ‘ ‘The Secret Life of Frogs’ also joined the conversation and spoke about his national award winning film.

Elaborating  the genesis of the movie, Shri Manu Ashokan said that the film is inspired by real life stories. “We have seen many women going through toxic relationships. We wanted to share those stories with the society through Pallavi, the protagonist and her relationship”, he said.

Talking about a Hindi film also being made on the same subject and comparisons, Shri Ashokan said, “Chhapaak is a biopic while Uyare is a fictional story inspired by real life incidents and people.”

Smt. Shenuga and Smt Sherga spoke about how important it is for women to come out and speak about the issues that they are facing.

Elaborating on his movie, Shri Ajay Bedi said that ‘The Secret Life of Frogs’ is India’s first film on amphibians. “ The film was shot in Western Ghats and it took three years to complete it. We have shot with many species but have shown around six to seven species in the film which are critically endangered. There were many challenges like finding the frogs, heavy rains, and chances of getting an infection. Technological advances like modern cameras have made things a bit easier,” he said.

On a note of advice to youngsters making wildlife films, Shri Bedi said that one has to understand the animal she picks for film and have to do a lot of research on that. “ Though we have to go with a script based on research, it has to be modified with the sequences we shoot,” he added.

He also pointed out the factors like deforestation, degradation of habitat and frog poaching that lead to the depletion of frog population. He cautioned, “ Frogs are like biometers of environment. If frog population is enough in an environment, it denotes the surroundings are healthy. If they are not there, it rings the alarm bells of warning. Things that affect frogs can ultimately affect human”.

THE SECRET LIFE OF FROGS

The ‘Secret Life of Frogs’ directed by  Ajay Bedi, Vijay Bedi showcases unique species of frogs like the purple frogs which are critically endangered and require immediate protection. Ajay and Vijay are the youngest Asians to have won the Wildscreen Awards (Green Oscar) for their films: ‘The Policing Langur’ and ‘Cherub of the Mist’.

Uyare directed by Manu Ashokan is the story of an acid attack victim and how she overcomes the trauma and realizes her dreams with the help of friends and family. Pallavi, a middle-class girl from Kerala moves to Mumbai to realize her dream of becoming a pilot. She loves Govind who is highly possessive of her, On night, he pays her a surprise visit in Mumbai which ends up in a big fight. Disturbed, she decides to leave him. To take revenge. Govind throws acid on Pallavi’s face, shattering her dreams. She then visits Delhi where she comes across a café run by the Acid attack victims. There she rises from the ashes like a Phoenix bird and live her life queen size.