The tale of Temple, NGO and election for Fatorda constituency 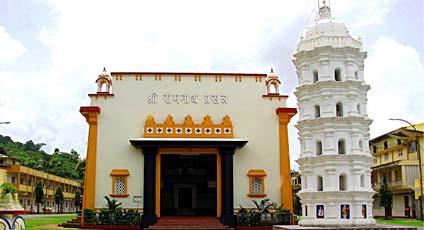 Porvorim: South Goa based social worker Mahesh Dattaram Naik’s tweet can make a news in the time when State government expressed its unhappiness over some NGOs.

Naik is a social activist and has his own NGO in Margao.

“Mahesh Dattaram Naik had made a representation to demolish portion of Ramnathi Devasthan citing that it has violated some drain to WRD. This was told to be taken up before the board by member Philip Nery Rodrigues,” Sardesai said.

“We took up this matter. Told him (Rodrigues) what it is. Told him what is Ramnathi Devasthan. Also cited whatsapp message which Naik has sent mentioning about the petition,” the minister said.

“In which he says “my petition is on agenda of TCP board meeting. So cancel the technical clearance order issued to Ramnath Devasthan. If not on 26th January I will keep a coconut at Damodar Ling Fatorda and confess to contest election in Fatorda constituency. sooner I will start the public awareness meetings to highlight the misdeeds of TCP minister and others all over Fatorda and Goa.”

Sardesai said when activist also come up through media coverage, we should also give coverage to this sort of thing. I am not making a police coverage on this but this is what he has sent.

“What we have decided that in the interest of democracy in the next meeting we will give him a hearing and let him come and represent. Let people know that he wants to demolish temple,” he added.

Previous articleShiroda, Mandrem by-election on February 16?
Next articleNavy’s circular on NOC for constructions condemned by TCP