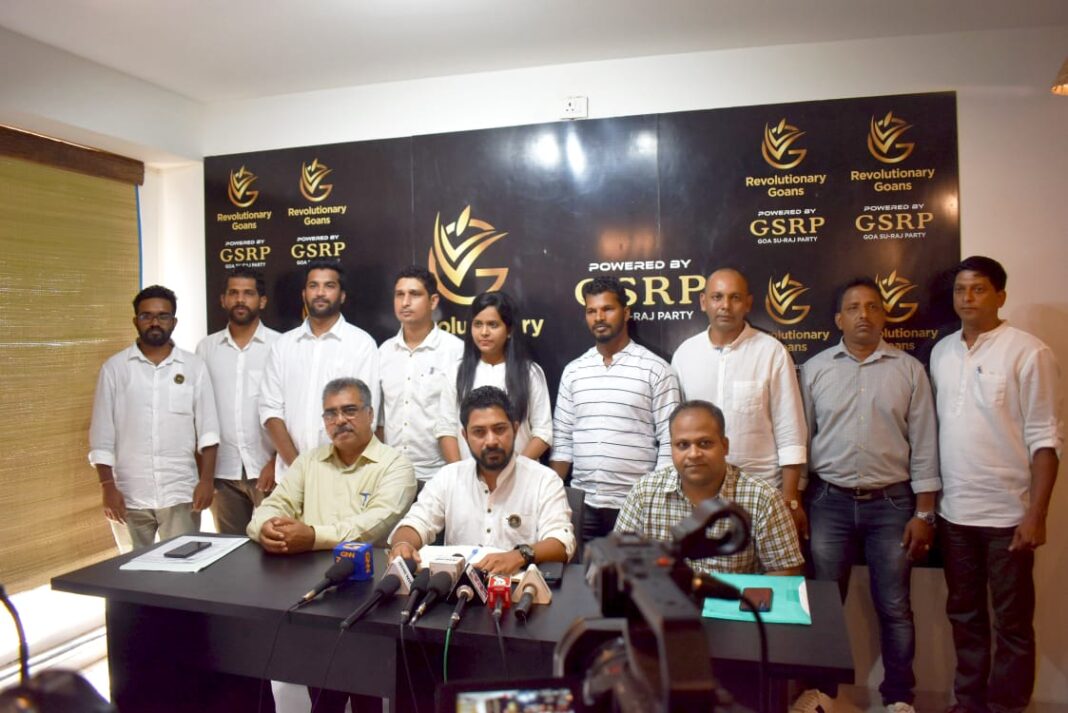 Panaji: Revolutionary Goans powered by Goa Su-Raj Party (GSRP) on Tuesday announced the much-awaited first list of nine candidates for the upcoming Goa assembly elections to be held in February.  RG is the first political party to announce their candidate list as they are clear of their vision and goal. Following is the list of the candidates and constituency they will represent.
St Andre- Viresh Borkar
Priol- Vishvesh Naik
Mandrem- Sunayana Gawde
Mayem- Shrikrishna Parab
Nuvem- Arvin Dcosta
Curchorem- Aditya Dessai
Curtorim- Rubert Pereira
Calangute- Francisco Gonsalves
Cuncolim- Wilson Cardozo
Goa Su-Raj Party (GSRP) leader, Inacio Vas expressed announced RG president Viresh Borkar as the first candidate of St Andre constituency. “I don’t have to talk much about Viresh. He is a cult figure and is fighting hard for the betterment of Goa,” Vas said during his address in Panaji.
Revolutionary Goans Chief , Manoj Parab announced the remaining eight candidates, all of whom have been chosen after consultation with their team working at the grassroots. The candidates have no criminal backgrounds unlike other political parties. They will work for the people and won’t be tempted by offers from other parties, assured Parab.
“These candidates will come forward and meet the people at home. They will be willing to hear and address your grievances anytime. Moreover, people can share their inputs in the vision document being prepared by the party. This is an important process that has to reach out to the masses,” said Parab.
RG pointed out how parties from Delhi and West Bengal are trying to make inroads into Goa and has asked the people to be alert and not fall into their traps.
“Our candidates are working for the betterment of Goa. They are passionate, dedicated and truthful. Revolutionary Goans powered by GSRP have been formed to rewrite the history of our beautiful state.
For a newly formed political party, the candidates might not have prior experience but General Secretary Mayur Arsekar  feels otherwise.
“By following a democratic process and setting a particular criteria, we have selected the candidates and they are being declared. We will provide them with training and prepare them well for the elections,” said Arsekar.