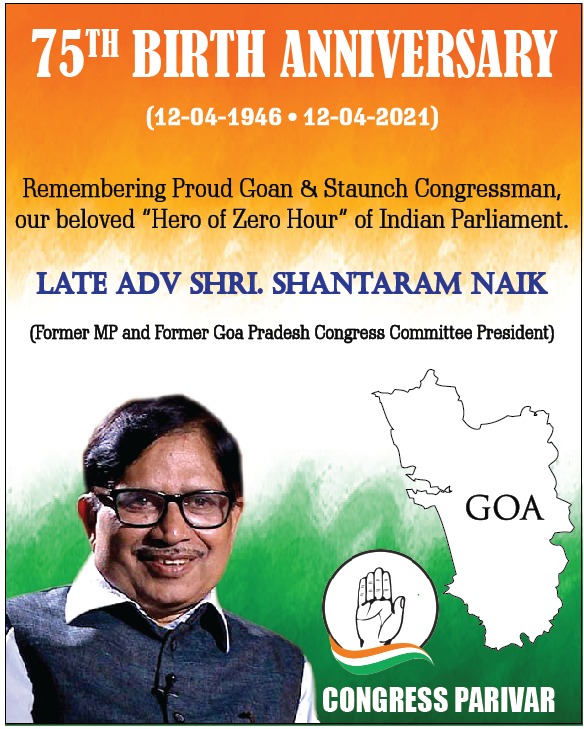 Birthday is the most spectacular day of one’s life and they deserve a celebration. The family and friends of Mr. Shatarambab were unfortunate to celebrate this memorable day as he was called to be measured and judged before his creator. I pray to almighty Lord to surround him with everlasting peace and happiness. Shantarambab was an endearing personality with an enduring vision whom I like, admire and respect very much.

Goa and India stands proud of her son, Shantaranbab whose vision inspires generations and especially the youth living a life of simplicity a service, he won the hearts of people of Goa and to describe his career in full would require volumes. A tall leader of integrity and courage for whom the true values of secularism mattered much.

A man created a history being a Cuncolekar from South Goa contested for Lok Sabha on congress ticket and won with comfortable margin from North Goa Parliamentary Constituency. Mr. Naik was again elected as member of Rajya Sabha for two Constituency terms.

In the Parliament he was popularly known as the Hero of Zero Hour, which gave glories to Goa by introducing the bill to grant statehood to Goa during the zero hour. Naik was also the GPCC President for several years in Goa. The vacuum that was created after his death still could not be filled.

I was fortunate to be closely associated with Mr. Shantarambab. A true loving and having concerned friend of mine and my Mentor.

(The writer is a Vice President, Goa Pradesh Congress Committee)

Previous articleFatorda Forward will bring excellence, innovation and character – Vijai
Next articleThe opposition is united with BJP, we won’t have any alliance: Sisodia