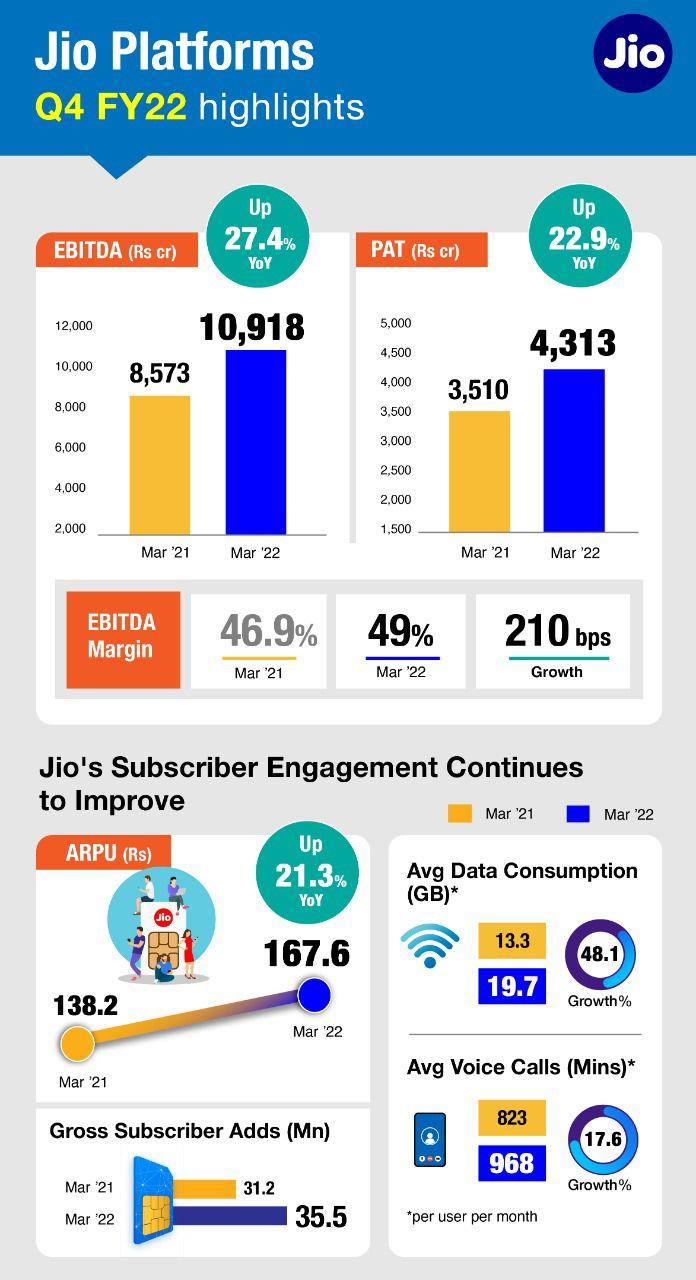 The standalone revenue from operations increased by about 20.4 per cent year-on-year to Rs 20,901 crore.

Mobile SIM consolidation after the tariff hike in the last December led to a net reduction of 10.9 million in customer base in 4Q FY22.

For Jio Platforms — the unit that holds telecom and digital businesses — the consolidated net profit for the just-ended quarter was Rs 4,313 crore, up nearly 23 per cent year-on-year. The gross revenue for March 2022 quarter came in at Rs 26,139 crore, nearly 21 per cent higher.

The total customer base as of March 2022 stood at 410.2 million, while ARPU — a key metric for all telcos — zoomed during the quarter to Rs 167.6 per subscriber per month.

The average revenue per user or ARPU was pegged at Rs 151.6 per subscriber per month in the December quarter.

The total data traffic was 24.6 billion GB during the quarter, translating into 47.5 per cent growth.

Jio Platforms’ gross revenue for the full FY22 rose to Rs 95,804 crore, 17.1 per cent higher than the previous fiscal (adjusted for Interconnect Usage Charges), according to the company statement.

“SIM consolidation post the December 2021 tariff hike led to a net reduction of 10.9 million in customer base in 4Q FY22,” the statement informed.

Gross subscriber addition continued to remain strong with total gross addition of 35.5 million in 4Q FY22 with sustained traction in mobility and FTTH (fibre to the home) businesses, it added.

During 4Q FY22, average data and voice consumption per user per month increased to 19.7 GB and 968 minutes, respectively.

“Jio is now the #1 FTTH services provider in the country with over 6 million connected premises. Jio consumers have over five hours of average daily engagement on the set-top-box,” the company said.

RIL’s Joint Chief Financial Officer Srikanth Venkatachari, during an earnings call, said there has been strong performance on the digital side but there has been change in net debt due to refinancing of high cost spectrum liabilities of Rs 30,971 crore.

Jio had prepaid Rs 30,971 crore spectrum dues to the government in January. Jio Platforms President Kiran Thomas said the company is building 5G network to go closer to the consumers and the rollout of the services is expected to take place soon.

He further said Jio has become the leader in optic fibre-based broadband connection and added twice the number of connections that the rest of the industry put together.