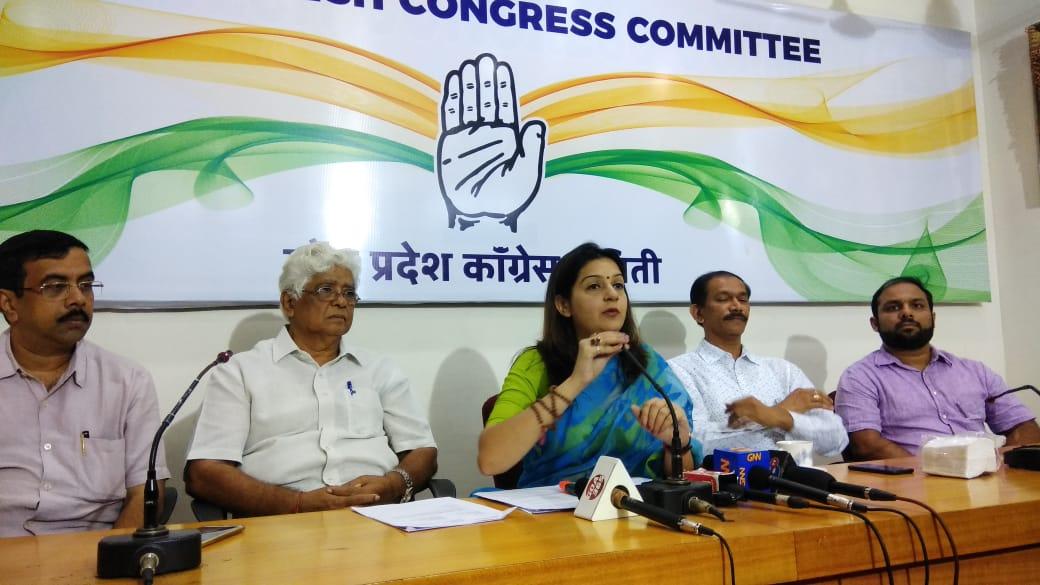 Panaji: The Congress party today said that then Union Defence Minister Manohar Parrikar should break his silence on the Rafale Deal brokered by Prime Minister Narendra Modi as “his silence amounts to agreement to the conspiracy that has betrayed the nation.”

Congress’ National Spokesman Priyanka Chaturvedi addressing a press conference in Panaji  said that when Rafale Deal was signed, the current Chief minister of Goa was the Defence minister of India and he wasn’t even present in France when the deal was signed.

“Forget presence, Defence Minister Manohar Parrikar had not even been prepared for the Prime Minister’s announcement, and been caught off guard,” she said.

Chaturvedi said “what we understand is that he (Parrikar) did not even know that a deal has been negotiated signed and agreed upon.”

“I would expect a Defence Minister who knows the Cabinet Committee on Security (CCS) norms are bypassed, transfer of technology benefit are not coming to my country…who knows that if even Defence procurement procedure was not followed ..who knows the self interest was served than our nation’s interests,  continues to maintain a silence, should answer the questions,” the spokesman said.

“Silence is also a conspiracy and agreement to the thing that has betrayed the nation. I would hope that, perhaps, he will come forward and answer the questions …It (the deal) was happening under his watch…he left that for someone else to do it.”

She recalled that Parrikar, just days  prior to the deal was signed had gone on record  that some deals of the Rafale are non-negotiable. “And  those are the very clauses that were negotiated on the table in France,” she claimed.

Chaturvedi said that the  nation saw how the current CM of Goa continued to hide answers on Rafale. “It is a known fact that he himself was not prepare for it and

was caught off guard,” she added.

Chaturvedi recalled that in the original tender invited by UPA-Congress led government, two fighter aircrafts were found equal on all technical fronts, that is Rafale and Eurofighter Typhoon. “In the financial bid, Rafale became L1. Eurofighter Typhoon admittedly wrote a letter dated July 4, 2014 to the then Defence Minister offering to reduce the price by 20 per cent.

She questioned why once PM Modi had decided to make a fresh purchase, why was that both the companies – Rafale and Eurofighter Typhoon – was not asked to bid afresh through Inter Governmental Agreement route so as to arrive at the lowest price in favour of public interest.

The Congress spokesman said that the party has been asking questions to the government on the entire deal but they  are  stonewalled by the government. “There is a conspiracy of silence to hide the investigation or to take a responsibility to carry out a investigation in a very open and shut case of how you can help your own people and bypass national interests,” she added.

“I don’t call Rafale, a deal. It is a scam. And what the government is doing and how it is trying to defend itself is nothing but a sham,” the spokesman said.

She alleged that the current government has made self-interest as its primary goal over the national interest.

The spokesman said that the union government overpriced the aircraft purchase, reduced the number of aircrafts, took the offset benefit away from a public sector company and handed it over to a friendly private company.

“The deal is a very open and shut case of taking away National interest interest and giving priority to the people who will benefit out of it. Specially those who hae been running a loss making venture,” she alleged.

Chaturvedi recalled that when UPA was in power, they had negotiated for 126 aircrafts out of which 18 would come in a fly away condition and rest along  with the transfer of technology.

“They would have been manufactured by Made In India Public Sector Unit, that is Hindustan Aeronautics Limited. So there would be two benefits,  one would be we are making our won jets, defence requirement that would protect our national borders would be made in India would be under our control using technology transfer,” she said adding that the  offset contract benefit would also go to HAL, which  would benefit the nation for Rs 36,000 crore.

She recalled how Prime Minister Modi during his France visit changed the terms of the deal and transfer technology was thrown out of window.

Chaturvedi said that current Defence Minsiter Nirmala Seetharaman  on the floor of the house has lied saying that we have a confidentiality agreement because of which we cannot share  the price, which is a blatant lie.

“When UPA was negotiating during their tenure, it had shared the price that it is buying and who is the agency involved,” she said.