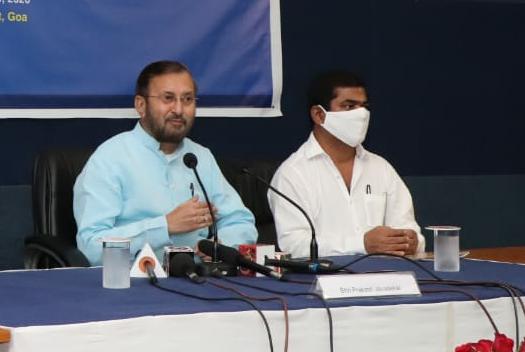 Panaji: Union Minister Prakash Javadekar on Sunday termed the agitating opposition parties as “dalals of dalals” for their objection towards the farm laws, which eradicates the middlemen who hike the  prices of the produce without passing on the benefit to the farmers.

“The actual is situation is that the farmers earn less for their produce and customer have to buy them at higher  rates. The middlemen hike the prices. The farm laws deal with this problem eradicating these middlemen,” Javadekar told reporters in Panaji, culminating his two-day long visit to the coastal state where he had met the farmers and agriculture stakeholders.
“Mujhe Kabhi Kabhi lagta hai ki vipakshi dal dalalon ke bhi dalal ban gaye hai (Sometimes I feel that the opposition parties have become dalals of dalals),” he commented as he claimed that the anti-farm law agitation will die out on its own.
“The lie has limited life while truth lives forever,” the minister said.
Referring to the protest by a group of people on his way to Mapusa town on Saturday, Javadekar said that “I doubt, whoever were protesting were real farmers.”
“Congress and NCP have launched their campaign to protest against the farm bills. I am going to ask them (Congress) to look at their manifesto (for Parliamentary election). Former Prime Minister Manmohan Singh has spoken about such (agriculture) reforms in his speeches. But Congress has now done U turn,” he said.
“The opposition parties are spreading a myth (bhram) that APMCs will be shut down under these laws or government will stop purchasing the produce or Minimum Support Price (MSP) would be stopped. All these are lies,” Javadekar said.
The BJP leader said that the conduct of opposition leaders in Rajya Sabha over passage of these bills was condemnable and shameful.
The minister said that country’s 60 per cent of the population is involved in farming sector but their contribution to GDP is 15 per cent. He said that there is need to increase the productivity and also give them markets outside the country so that their standard of living improves.
Javadekar said that when he was going to school, the country’s population was 30 crore which has increased now to 138 crore but despite that, there’s no shortage of food. “We are thankful to the farmers who have been feeding our country,” he commented adding that it is responsibility of the government to increase their income.