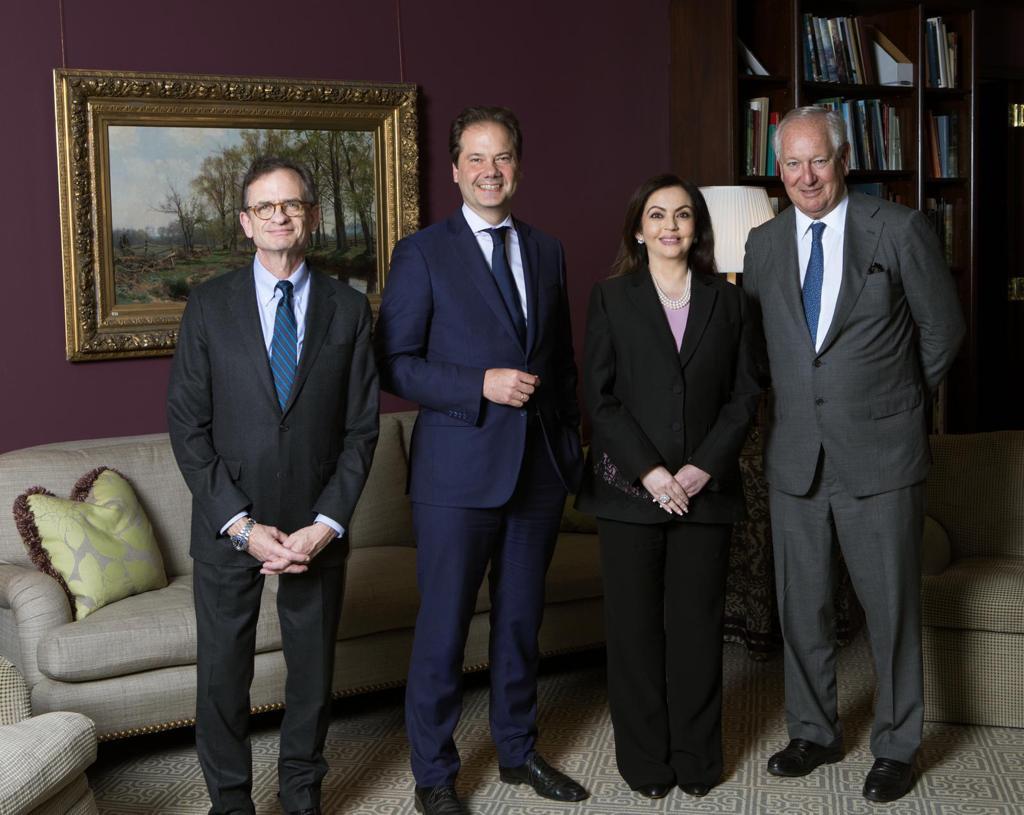 New York, Nov 13  Nita Ambani, the founder and chairperson of the Reliance Foundation, has been elected an honorary trustee of New York’s Metropolitan Museum of Art, the arts powerhouse of the US.

Announcing her election by the board on Tuesday, the museum’s chairman Daniel Brodsky said: “Mrs Ambani’s commitment to The Met and to preserving and promoting India’s art and culture is truly exceptional. Her support has an enormous impact on the Museum’s ability to study and display art from every corner of the world.”

Popularly known as The Met, the museum is a landmark institution on the US displaying tens of thousands of objects covering 5,000 years of art from around the world. Under her leadership, the Reliance Foundation has supported several programs at the Met.

The museum said in a statement, “Generous with her time and expertise, Mrs Ambani is also a member of The Met’s International Council.”

In 2017 she was honoured by the museum at The Met Winter Party celebrating the achievements of “those who foster greater diversity and inclusion in the world of art”.

She “is especially committed to preserving and promoting India’s art, culture, and heritage”, the Met said.

Reliance Foundation has sponsored key cultural events such as “The Elephanta Festival,” and “Abbaji,” the annual concert of master musician Ustad Zakir Hussain, in its mission to recognise the cultural legends of India and ensure their relevance to a younger generation.

Besides collaborating with the Met to promote knowledge of Indian arts to international audiences, the Reliance Foundation has supported presentations such as “Gates of the Lord: The Tradition of Krishna Paintings” at the Art Institute of Chicago, the Met said.

Reliance Foundation’s support for the Met began in 2016 with the first museum retrospective of the Nasreen Mohamedi’s work in the US.

In 2017, the Reliance Foundation made a commitment to the Met to support exhibitions that explore and celebrate the arts of India. This led to the exhibition, “Modernism on the Ganges: Raghubir Singh Photographs” in 2017-2018. It was followed this year by “Phenomenal Nature: Mrinalini Mukherjee” – the first comprehensive display of the artist’s work in the US.

With Reliance Foundaton’s sponsorship, the Met will hold next year the exhibition, “Tree and Serpent: Early Buddhist Art in India, 200 B.C.–A.D. 400, at its landmark venue on Fifth Avenue, along with others that will cover such topics as 17th-century Mughal art and contemporary Indian sculpture.

The museum said that “in her role as Founder and Chairperson of Reliance Foundation, Mrs Ambani has impacted the lives of more than 34 million people across India through the organization’s initiatives in rural transformation; health; education; sports for development; disaster response; arts, culture and heritage; and urban renewal.”

It added, “The Foundation’s education program pays special attention to gender equity to increase much-needed opportunities for girls and young women. The Foundation’s Dhirubhai Ambani Scholarship has so far provided financial support to 12,000 students to pursue graduation in any institution of their choice—nearly half of these scholarships are given to girls.”

The first Indian woman to serve on the International Olympic Committee, Ambani has received the Rashtriya Khel Protsahan Award from the President of India for Reliance Foundation ‘s work in the area of sports for development, the Met said.

Forbes recognised her entrepreneurship by listing her as one of the 50 most powerful businesswomen in Asia.