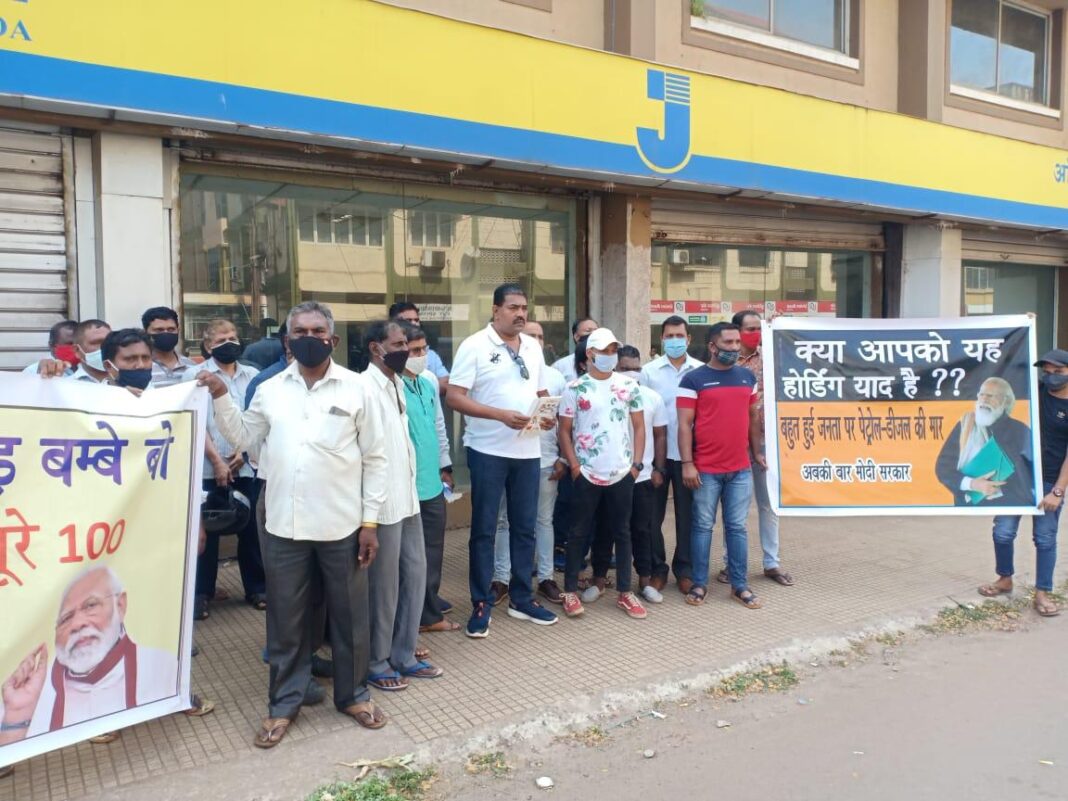 Around 100 motorcycles pilots and Rickshaw drivers in the port town Vasco da Gama today got lucky as they were offered fuel at a subsidized rate of Rs 50 by Goa Pradesh Congress Committee (GPCC) Vice President Sankalp Amonkar as a token of protest over the rising fuel prices in the country.
While the pilots and rickshaw owners hailed the move of Amonkar and appreciated the token offered by congress, they also hit out at the state and union government for not considering the plea of small time people and businessmen, whose livelihood was affected by the rise in fuel prices.
Many congress workers gathered during the agitation near the Joshi Petrol pump at Vasco. Speaking to media, Sankalp Amonkar hit out at the Giver for the steep rise in fuel prices and demanded that the Government should cut down the taxes imposed on fuel that had led to the rise in fuel prices.

“We decided to have a unique protest with banners that were put up while BJP was contesting the elections in 2014 so as to remind the government that it was they who had assured to get the petrol prices at Rs 35. While the UPA was in Power, the price of crude oil was at around 100 USD and the petrol price was at around 60. However, presently the price of crude oil barrel is half the price at around 50 USD and yet the price is around 83 in Goa and over Rs 90 elsewhere in the country. While the tax on fuel was at Rs 3 during UPA regime, the tax imposed now is ten times more and at Rs 30 and this has led to the price hike. We demand that the Government come down on this tax so that the prices come down . Several motorcycle pilots and rickshaw owners have been finished during lockdowm and this rise has made their lives miserable,” said Amonkar.
He also suggested how a middle-class person working in a private company has to shell out around 25 percent of his salary on fuel.
“The government has not considered the normal man in their budget and the price rise will have cascading effect and all the products including vegetables, milk products and groceries will also rise finishing the already struggling common man. In the regime of the BJP,the poorer become poor and the rich become richer. As a token of protest, we will be supplying fuel to around 100 motor cycle pilots and rickshaw at Rs50 per liter today, ” he added.

Previous articlePramod Sawant has failed to provide solution on resumption of mining: Puti Gaonkar
Next articleGovansh Raksha Abhiyan Demand immediate action on illegal transport of beef from Karnataka to Goa