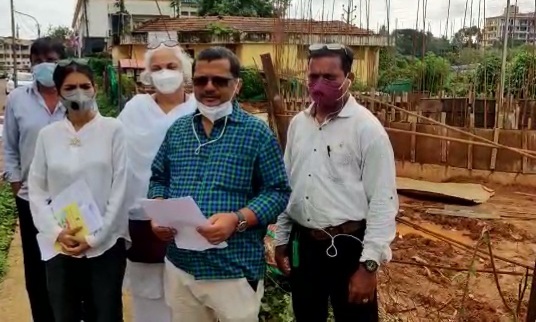 Margao: The Shadow Council for Margao today demanded from the Council and the concerned Margao and Fatorda MLAs to make public the new proposal of Bio Methanation Project being planned at Sonsodo.

Addressing the media at the ongoing Bio Methanation Plant site at SGPDA retail fish market, SCM Convener Mr. Savio Coutinho stated that the Council has already listed for discussion, some fresh Project as a subject for the Council meeting scheduled for 9th July 2021, and also addressed the media with respect to the new proposal. However there are no details whatsoever, with regard to what sort of project is being proposed, and it’s cost to the public exchequer. SCM also questioned the MMC over the listing of the item no 21 in advance.

The reason for addressing this issue at the Bio Methanation Plant site is to highlight the ongoing works for the setting up of 5TPD capacity plant costing 2.42 crores, which is half the costs of same capacity plants which were being desperately pushed by the outgoing Council last year. And the outgoing Council was also under the control of the same leaders, Mr. Coutinho stated.

The statement made by both the MLAs of Margao and Fatorda during the press briefing on Saturday is indeed confusing. They claimed that they are in doubt over the present Bio Methanation plant being set up, as it was approved when there was no elected Council in place. ” Here we categorically wish to remind the MLAs that the Bio Methanation process for treatment of waste is totally new to all, however, experimenting with a half priced Bio Methanation plant, is definitely a more sensible option rather than a double priced one”, Mr. Coutinho charged.

SCM further criticized both the MLAs for being lenient to the waste collection agencies, which happen to be their favourites in the two constituencies. Mr. Coutinho charged that NEGLIGENCE to ensure proper collection of segregated waste, is the primary reason for the failure of proper treatment of wet waste at the plant. We hope that the newly elected councillors will check upon the segregated waste collection in their respective ward’s, which will go a long way in settling this issue more effectively.

The SCM further stated that it is the right of Madgaonkars to know the specifications of the proposed plants and the costs that the public exchequer would have to bear. “This is being consistently demanded by us since last May; however, transparency seems to be eluding this scheme”, Mr. Coutinho lamented.

In the past we have seen how lakhs and lakhs of taxpayers money left the Council treasury in the guise of Machinery for Fire extinguishing, un-recommended Renerzyme purchases etc. And the people of Margao surely don’t wish that the same thing should be repeated at the taxpayers cost.

On the invitation for EOI to run the existing plant, SCM pointed out that there are several renowned Goans into waste management successfully handling waste. “We firmly demand that these Goans should be roped in to manage the operations and also ensure that properly segregated wet waste is supplied to the plant”, SCM states.

SCM Convener Savio Coutinho, further threw up a challenge to the Council and the concerned MLAs to hand over the operations to the SCM, and accepted willingness to assist with only bare minimum men and machinery from the Council and without any monetary payment to the SCM.

Adv. Seoula Vas recalled how she was harassed by the returning Officer during the Municipal elections over a comedy video posted by her on Facebook, which depicted the 17 crores scam on the 7 double priced Bio Methanation plants. “I was on purpose sent notices through machine gun yielding cops, directing me to appear for hearing’s during the last few days prior to the polling day, to deprive me from campaigning in my ward”, Adv. Vas stated.

The press briefing which was attended by SCM Convener Savio Coutinho, Adv. Seoula Vas, Radha Kavlekar, Agostinho Gama, Eduardo Lourenco etc. strongly demanded that until and unless the 5TPD plant is completed and checked for its efficacy, no financial burden should be taken on any form of double priced projects.