History of Opinion Poll to be part of school curriculum from coming academic year: Vijai Sardesai 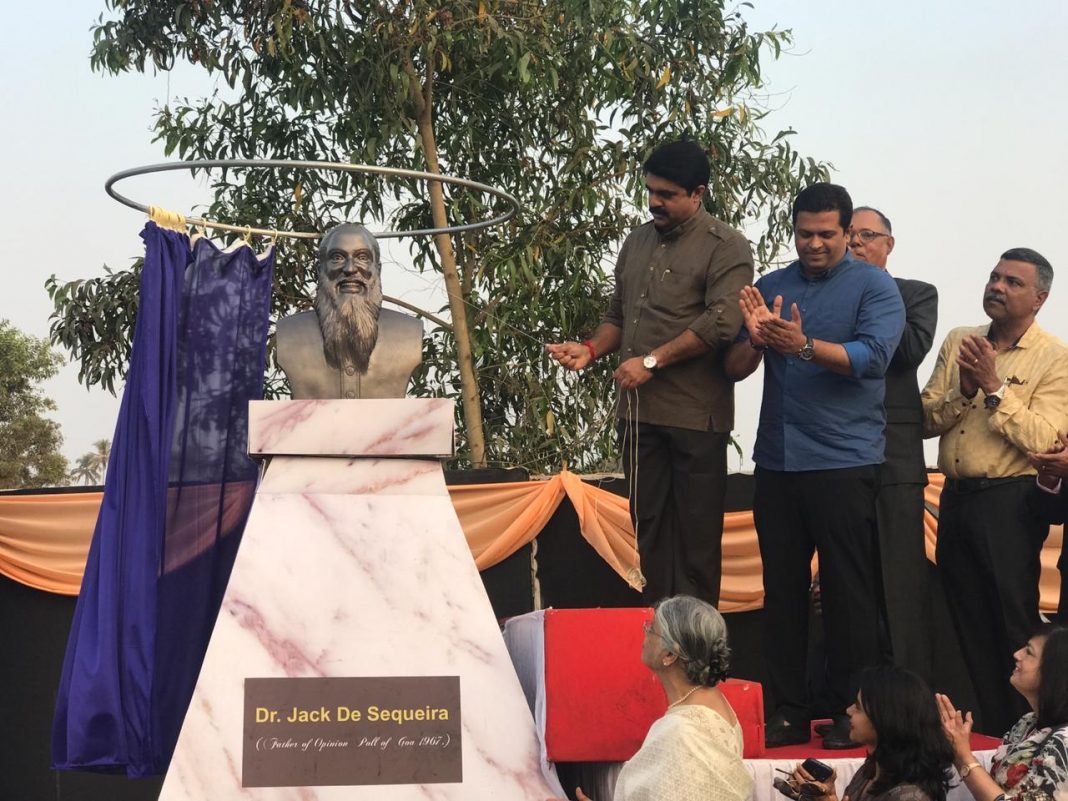 Merces: On the occasion of Opinion Poll Day, Goa Forward Party Chief and TCP Minister Vijai Sardesai said that the history of Opinion Poll would be part of the school curriculum from the coming Academic Year.

Sardesai was addressing the gathering after unveiling the bust of Late Dr Jack Sequeira at Merces in presence of RDA Minister Jayesh Salgaoncar and family members of the stalwart besides others.

The minister said that he has already spoken to Chief Minister Manohar Parrikar who has said that the history of Opinion Poll and Dr Jack Sequeira would be part of the curriculum in coming Academic Year.

He said that Sawant Committee formed to deliberate on the issue has already submitted its report to the government.

Sardesai recalled that inclusion of History of Opinion Poll in school curriculum was one of the demand raised a year back, which is nearing completion.

The GFP Chief assured that the demand of installing Statue of Dr Sequeira at Assembly Complex would also be met soon.

Taking jibe at Congress party, Sardesai said “the party that ruled Goa for maximum period of time, that is Congress party, its Goa president has faltered today even on the date of the opinion poll day.”

He pointed out that Congress Goa President Girish Chodankar in his tweet about Opinion Poll Day had mentioned the date of historic referendum as 1966, when it was actually 1967.

He charged that Congress has ‘Maharashtrawadi Hangover.’

This hangover is there for a long time because people who have migrated from the MGP has come and taken hold of the Congress and because of the bankruptcy of leadership in the congress, they have become leaders of the party.

“They don’t know about Goa’s identity. They have ignored it so far and they will continue ignoring it. They are only responding because we as a regionalistic party have bought Goemkarponn which is Goanness into the central political discourse in the state,” Sardesai said.

He said “One by one we will achieve which we have set out. Recognition of Dr Jack Sequeira in the legislative assembly complex by virtue of a statue, the demand which is pending for long time, we intend to achieve this in a matter of time.”

“We want people of Goa to rally behind us,” he said. Sardesai said GFP is  in the politics with our strength. We have shown our strength. “Congress party president says that I had one sided love for congress when we were asking for alliance. We have shown them the result,” he recalled.

“Many things in Goa are just matter of time.”

GFP leader and RDA Minister Jayesh Salgaoncar said that the history of Jack Sequeira should be taught to each of the student so that they know about this important event.