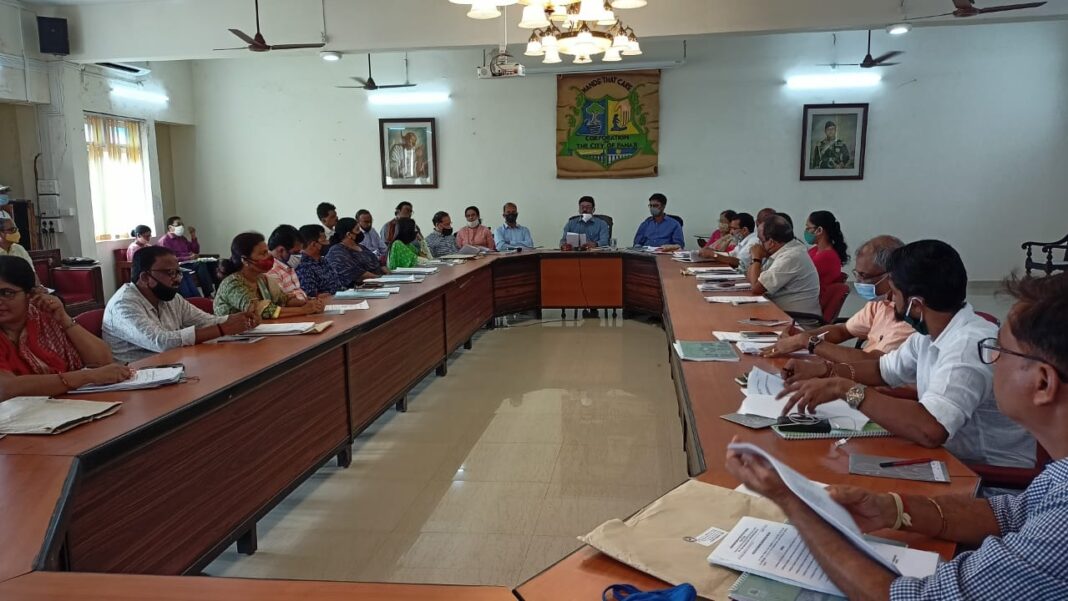 Panaji : With the Corporation of City of Panaji (CCP) getting ready for the upcoming election, the last council meeting was more of a “Happy Ending.”

The meeting began with appreciation of work undertaken by CCP Mayor Uday Madkaikar. “I laud CCP and the Mayor’s efforts to remove the illegal structures in CCP Market in Panaji” said Surendra Furtado, Former Mayor.

Corporator Rupesh Halarnekar who was also present for the meeting asserted the need to exempt trade fees of  4 months for traders in Panaji who suffered loss due to lockdown and Pandemic. “The contractor who has been given the responsibility of Pay Parking was exempted hence the traders should also benefit” argued Halarnekar.

Mayor reckoned that most of the traders have already paid their fees and that he has received a few letters who have asked for exemption. “These exemptions need to be calculated, now in some days news council will be formed maybe they can take a call” said Mayor

Rupesh Halarnekar also argued that since CCP seems to be focusing on earning revenue from pay parking when the objective was mainly to solve the problem of double parking and other parking related issues. He said since people are already paying their taxes taking a parking fee does not make sense “The name and contact number of the contractor should appear on board where the government has put signs to park four wheeler and two wheeler” said Halarnekar.

Vaidehi Naik, Corporator of Ward no. 12 raised the issue of the Panaji CCP market which has been pending for the last 15 years. ” All traders with shutter shops in CCP market are doing business free of cost without paying any Water of Electricity bill this needs to be regularised by bringing order” asserted Naik

Mayor Madkaikar has said that CCP as comparison has done commendable Job during the Pandemic. He believed that installing signals at places has improved traffic in Panaji as people have become more disciplined. “CCP has earned Rs 57 lakhs from the revenue generated by the Casino Advertising board.” When asked about whether he supports Casinos he said “The government has already renewed the license of Casinos we are not authorised to shift the Casinos from Mandovi”