Goa will be governed by Goans: P Chidambaram 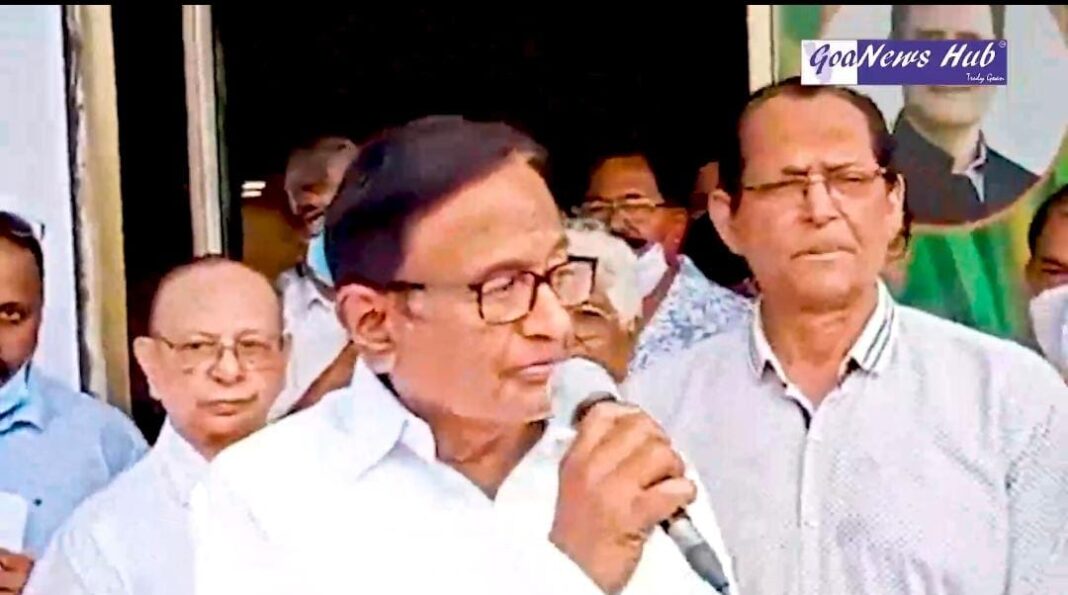 Panaji: AICC Goa election Incharge P Chidambaram commented that Goa is not a colony that will be colonised by some political party.
Chidambaram was addressing party workers after inaugurating state election campaign office in Panaji.
“Goa will be governed by Goans. Goa is not a colony that will be colonized by some political party. Goa will be ruled by Goans,” he said without referring to any political outfit.
Chidambaram said that Congress has presented to you the faces of our leaders. “And in the days ahead we will present you more young leaders, women leaders, schedule tribe leaders, fisherman community leaders, Dalit leaders who will govern Goa,” he added.
Chidambaram said “Goa cannot become a political colony of any invader. Goa must be governed by Goans. Goa is of Goans, by Goans and for Goans.”
The former union finance minister said that he will be guiding the workers on how to convert election offices into vibrant election offices.
“ Every block committee will have an office and every block committee office will function as a block election campaign office,” he said.
Stating that congress will now hit the ground, Chidambaram said “We have spent enough time planning and discussing. Now is the time to go out in the field and start the work. “
“Between now and 100 days from now there will be elections. I don’t know the date of elections, but let me count a 100 days from today. everyday we must move forward. win more hearts and minds,” he added. . He said that congress should win more votes and send a credible message to the whole of Goa and the whole of India that Goa will see a congress govt in 2022.
“Let me say one thing from history..whoever wins Goa wins Delhi. in 2007 we won goa..in 2009 we won delhi. in 2012 we unfortunately lost goa 2014 we lost delhi. in 2017 you won Goa but our legislators lost goa,” he commented adding and in 2019 we lost Delhi.
“This time we will win Goa in 2022 and we will win delhi in 2024. We go forward with courage and confidence,” he said.
Chidambaram said “the history is ours..we are beginning today on an auspicious day and our office has been inaugurated by a valuable statesman and former chief minister pratap singh rane.”
“Remember those golden years when Goa moved forward. Goa progressed . Goa developed. Goa’s industries…goa’s schools.. goa’s colleges…goa’s roads.. we will bring back that golden age of Goa beginning 2022. I wish you go forward with courage and confidence,” he added.