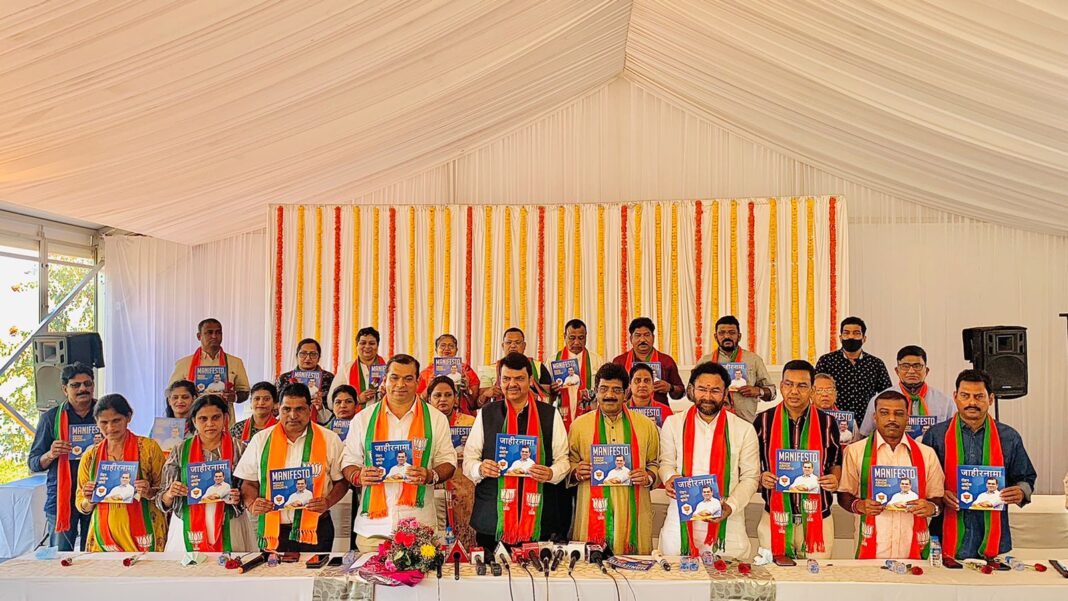 Panaji: The former Chief Minister of Maharashtra and the present opposition leader and Goa’s BJP Incharge Devendra Fadnavis stated that not only residents of Porvorim but the entire Goa has witnessed the abilities of former Revenue minister and Porvorim MLA Rohan Khaunte. Rohan Khaunte knows his potential and he has capability to take Porvorim and this beautiful State ahead on the path of developmental path Said Mr.Fadnavis .He was addressing BJP karyakartas after releasing the Manifesto of Rohan Khaunte for Porvorim constituency on Wednesday .Recognizing the need of the digital age, Khaunte released his e-manifesto too in said function.

Mr.Fadnavis mentioned that Manifesto is not only a mere paper document but it is a commitment to make the Porvorim an ideal constituency .. In BJP’s manifesto, we have stated to resolve all issues including women empowerment, senior citizens and unemployment. Unlike others, we do not make the people helpless by declaring unemployment allowances. Rather we want to make unemployed youths little active in the society through employment.We have committed to launch a pilot project in Goa on an experimental basis as a step to liberalize India from carbon emissions by making greater use of non-conventional energy sources,. The tourism would get a boost as soon as the Mopa Airport project is commissioned providing employment and business opportunities to youths.

Union Tourism Minister and Goa state party co-incharge G Kishan Reddy lauding the performance of Khaunte Mr.Reddy stated that Goa needs a stable government. He appealed to the people to elect the BJP candidate to provide a stable government for the development of the state ..
AS INDEPENDENT 90% PROMISES
FULFILLED: ADMITS TANAVDE
Praising Khaunte’s performance, BJP State president SadanandTanavde admitted that Khaunte, who was elected twice as an independent from Porvorim, had fulfilled 90 per cent of the promises made by him in manifestos during his two terms. He said that it is not easy to get elected as an independent if you are not efficient. With his professional aptituede Khaunte would fulfill the promises made in his manifesto. It is the duty of BJP karyakartas to render their full support to Mr.Khaunte to make dream a reality .

While representing residents of Porvorim and knowing their expectations, I understood the basic requirements of this constituency.He has presented the report card of the work done by him during last two terms to my voters . I know my responsibility as also the need of the residents of the constituency. The residents of Porvorim have stood by him during bad and good times .
After having served Porvorim for two terms as an independent, he is contesting presently on BJP ticket . He is enjoying the support of the local BJP Mandal too . He has worked tirelessly during the course of last 10 years to address the issues of water, electricity, drainage and waste management etc. Some systems require the improvisation and we are into it. He intends to launch e-mobility service like E rickshaw/van concept to address the issue of internal transport system in the constituency ..With the help of the government at the centre, Goa is moving ahead towards a developing state. He believes in women empowerment and his vision is to make women prosperous and self-reliant through new ventures by training them at the micro level. His goal is to fulfil the promises he has made in the manifesto in next five years, added Khaunte .

Khaunte further mentioned that he intends to implement adventure and skill development projects in the open spaces of Porvorim in near future. There is a lot to be done in the fields of sports, health, agriculture and basic amenities . The overall development of the Porvorim is my vision in the years to come, he said.
Zilla Panchayat Member Kavita Naik, Former ZP member Vaishali Satardekar, Sarpanch of Soccoro Sanjay Pednekar, Sarpanch of Penha de France Swapnil Chodankar, Porvorim BJP Mandal president Kishore Asnodkar, former Sarpanch of Salvador de Mundo and current Panch member Sandeep Salgaonkarand some other dignitaries including Panch members were present on the occasion.

(BOX)
While replying to a question raised by a reporter Mr.Fadnavis stated that Union Minister Amit Shah has promised to resumet mining business in the state in the next six months. Mr.Shah has mentioned that Fifty percent of the obstacles in this path have been removed and the remaining will be done with shortly said Fadnavis.He appealed to Goan’s not to worry and to be relaxed over shah’s assurance on mining activity. The issue of mining business in Goa was messed up by Congress party.The Supreme Court would not have intervened in the matter otherwise. Adding that the Goa Mineral Corporation has now been set up and more than 50% anomalies have been addressed said Fadnavis.