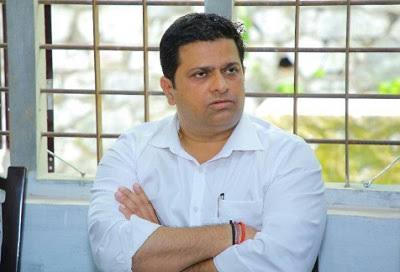 Panaji: Goa Forward Party (GFP) on Thursday issued show cause notice to its MLA Jayesh Salgaonkar accusing him of being involved in anti-party activities.

The show cause notices comes at a backdrop of rumours that Salgaonkar is all set to join BJP on Friday ending his four and half year long stint with Goa Forward Party as Member of Legislative Assembly from Saligao constituency in North Goa.

When contacted, Salgaonkar denied of being involved in any anti party activities and said that he has not received any show cause notice from the party.

“This has reference to your behaviour and conduct which have warranted the issuance of this show cause notice, so as to elicit a response, if any from you,” the notice reads.

The party has said that for  the last couple of months, it has been continuously receiving reports from Goa Forward workers in Saligao, and from party local leaders about your constant anti-party activities.

“On Jan 31, 2021, we as elected MLAs of Goa Forward Party had publicly taken an oath before Dev Bodgeshwar to never align with the BJP under any circumstances in the future. Inspite of this you have been continuously hobnobbing with the BJP and their General Secretary (Organisation) Satish Dhond,” the notice reads referring to the swearing that the party had done in the temple at Mapusa.

The GFP has said that on November 30, 2021, Panaji BJP MLA Atanasio Monserratte made clear remarks to the media that one of the Goa Forward MLAs who was missing during the trip to Delhi to meet  Rahul Gandhi is soon going to embrace the BJP. “Inspite of this news going viral, there was no denial or clarification from your side,” the notice reads.

The GFP has said that Salgaonkar’s behaviour and conduct during the past few months clearly indicate that his intent is to work with the Bharatiya Janata Party for personal gains thereby compromising the values and policies of the party.