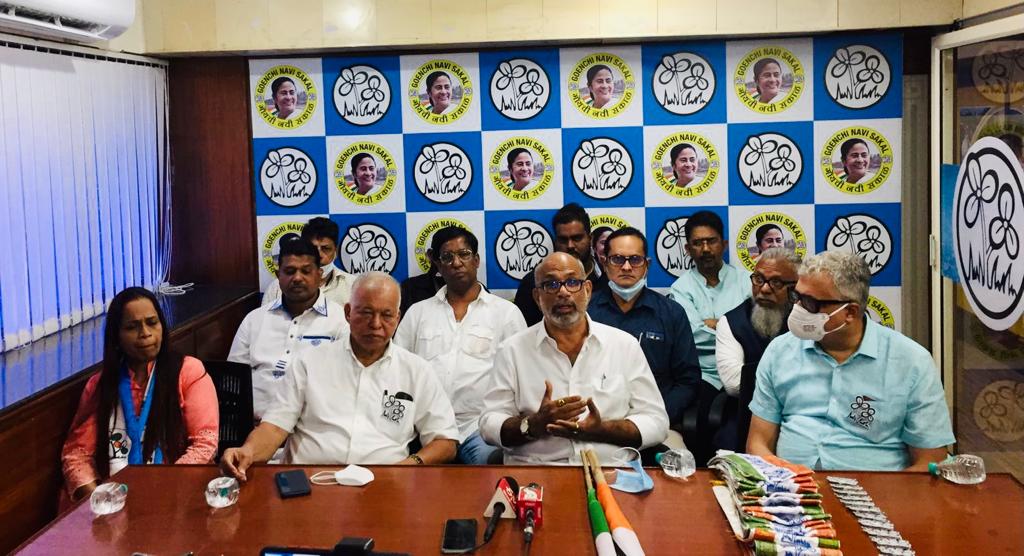 The Goa Trinamool Congress further strengthened its base today with the induction of former Chairperson and incumbent Councillor of Margao Municipal Council, Shri Ghanashyam S Prabhu Shirodker, along with eight other prominent businessmen from the area. The inductions took place in the presence of Rajya Sabha MP and AITC National Vice-President Shri Luizinho Faleiro and TMC’s Parliamentary Panel leader in Rajya Sabha, Shri Derek O’Brien, at the party office in Panaji.

Noting his dissatisfaction at how the current government has neglected people and their interests, Shri Ghyanashyam Shirodker said, ‘There has been no attention paid to the fish market, bus stands, parking lots, railway station and on top of that the MLA of Margao is himself involved in match-fixing. He has done no work for the area over the last few years and the people are waiting for a change in governance.’

Looking forward to TMC’s policy-based governance under Mamata Banerjee’s leadership, he further added, ‘Didi is an inspiration and TMC is the only force that can wipe the BJP out from Goa. This time the fight will be between the BJP and TMC.’

Shri Ghanashyam Shirodker who had won the civic polls for the third time in a row, left the Congress after it failed to consider his candidature despite him being Digambar Kamat’s long-time aide and loyalist. Eight other prominent businessmen from the area, Shri Prasad Navelkar, Shri Taquee Sayed, Shri Suresh Karapurakar, Shri Moosa Sheikh, Shri Amar Kantak, Shri Minhazuddin, Shri Abdul Khadar Gazi and Shri Arjun Hatriki also joined the party, alongside.

Welcoming Shri Ghanshyam Shirodkar into the party, Shri Luizinho Faleiro noted, ‘Goa TMC has a dedicated vision and mission and we are prepared to fight tooth and nail to defeat the BJP and usher in a ‘New Dawn’ in the state. People of Margao have been waiting for change since long, and it is time we vote in a party that actually works for Goans.’

The joining of these dynamic leaders, who have actively been working towards the betterment of their areas strengthens Goa TMC’s conviction to defeat the BJP, and set into motion good governance practices in the state.