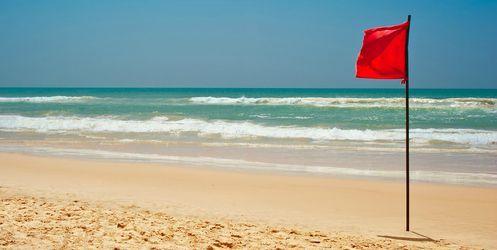 Panaji: With heavy pre-monsoon showers expected over the next two days in the coastal state of Goa, Drishti Marine, the state-appointed professional lifeguard agency has issued an advisory instructing visitor to the beach not to venture into the sea during the next 48 hours.

According to the alert issued by the Indian Meteorological Department, heavy rainfall is likely at isolated places in north and south Goa with wind speeds of 45 to 55 kms per hour.

“The coastal belt will also witness fast currents and high waves in the range of 2.8 to 4 metres high. Citizens are advised to be cautious as rough weather and sea conditions will prevail during these days,” the spokesman of the company said. “Drishti especially cautioned adults to keep a very close eye on children while on the beach and to not allow children to venture into the waters unattended, no matter how shallow it may be,” it adds.

“Drishti advises visitors to avoid rocky areas, cliffs and hills on the shoreline specially to click selfies. These can be very slippery. Moreover, the wave height and intensity are expected to be high and one can easily lose their footing,” the spokesman said.

He said that IMD has also cautioned fishermen not to venture into the sea off Goa- Maharashtra coast and open sea in the next two days.

“Owing to the lockdown and present weather conditions, red flags have been posted across all beaches under Drishti’s surveillance indicating that these are strictly non-swim zones,” he said.

“Lifeguards continue to monitor and patrol the beach stretches. An accident can take place at any time and our lifeguard force who are trained in first aid and other services and they are the first responders for any emergencies and medical interventions along the coast,” the spokesman said.

Goa has 105 kilometre long coastline which caters to the locals as well as tourists who flock on the shoreline.

Previous articleWholesale fish traders to shut down their activity till SGPDA opens the market
Next articleUnlocking 1.0: Goa to implement MHA guidelines, more relaxations on the way