BJP will win three-fourth of the majority for 2022 election: Hussain 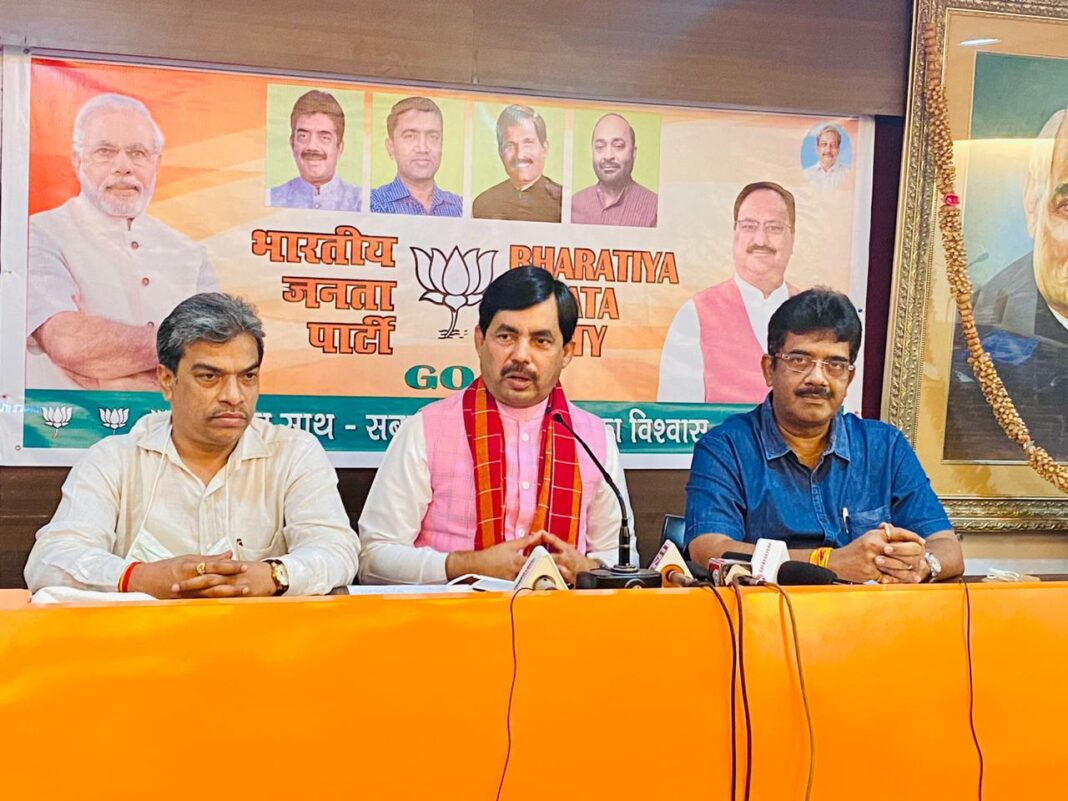 Sawant’s vision for Goa is not Swayampurna, but one of lawlessness and barbarism– Vijai Sardesai

Hussain, who is in Goa, today afternoon addressed press conferences at the party headquarter in Panaji, in presence of BJP State president Sadanand Tanavade and spokesperson Damu Naik. In the morning, Hussain had called on the Chief Minister Dr Pramod Sawant at his official residence, Altinho.

Hussain said that the recently concluded Zilla Panchayat elections were litmus test for the BJP led government, which the party passed with clear mandate.

He said the party won a total 33 seats- 19 in North Goa and 14 in South Goa. He said that this is probably for the very first time that the party won with a clear majority local body election.

“I am confident that 2022, BJP in Goa will win the election by at least three-fourth majority,” he said adding ‘we have got a good CM and a good party president’.

The national leader informed that States like Uttarakhand and Uttar Pradesh will also go for polls in 2022 and the BJP will turn out victorious there too.

Taking a dig at the opposition, especially Congress, Hussain said that BJP is the only political party existing in the State, and opposition like Congress, has no political standing.

Praising the State government for maintaining law and order situation, Hussain said that Goa is considered as one of the safest tourism destinations in the country. He said that the government is committed to promote tourism, local culture, art and tradition.

Responding to questions on the ongoing protests against several developmental projects, Hussain said that the party has full faith in Dr Pramod Sawant’s leadership and is confident that a solution will be worked out.

“I can assure you that CM is capable enough to address the issue. He will work out a solution balancing environment and development,” he said.

Speaking on the Farmers Law, Hussain said that since the matter is sub-judice, he would not like to comment but the Central government is studying the observations made by the Supreme Court and a reply will be filed.

He said that the Central government is committed to ensure that farmers get the maximum benefits and the three Farm laws are aimed towards this. He said that the protesting farmers are also people of India and hence, the government was always open for dialogues.

Hussain slammed Congress and other opposition for spreading lies and politicizing the COVID-19 vaccine issue. He said that the opposition are not proud of anything being Indians.

On upcoming elections in West Bengal, Hussain said that the party has target of over will win over 200 of 294 seats in the state assembly elections slated for April-May this year. He said that people in Bengal are looking for change.

Panaji: The Congress leader Architect Tulio De’Souza has demanded that Goa government should come clear over the office memorandum issued by the General Administration...
Read more

Sawant’s vision for Goa is not Swayampurna, but one of lawlessness and barbarism– Vijai Sardesai

Margao – There is enthusiasm amongst the Congress Workers with regards to enrolment of new members through Digital Membership Drive. Despite facing the network...
Read more