As 10 public sector banks head for merger, there is growing fear and mistrust among employees – By Jeanne Pereira 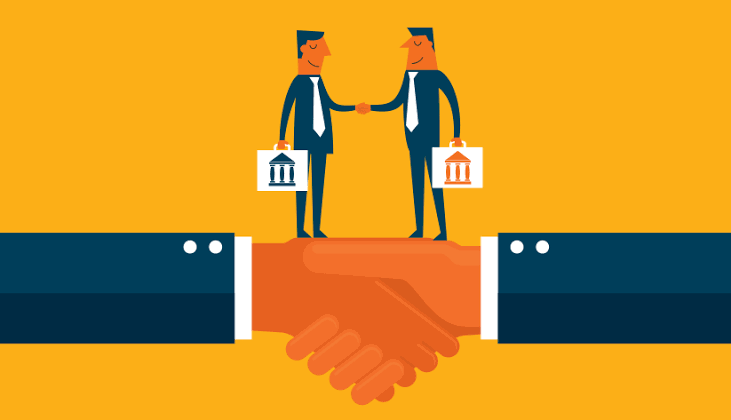 Ever since the government announced the merger of 10 public sector banks into four large lenders last August, there is an invisible angst and a quiet outcry amongst bankers. The fear is writ large upon the faces of the bankers when they come to the State Bank Institute of Leadership (SBIL) to take part in leadership programmes.
In the sessions that follow and during tea breaks, one would often hear whispers and murmurs in their private chats. We, at State Bank Institute of Leadership (SBIL), were able to relate with their angst as we had a similar fear a few years ago when the merger of associate banks with the State Bank of India was announced.
Later, during the training sessions, when the participants were asked to make presentations in groups on the challenges their banks were facing, all groups without hesitation referred to the upcoming mergers.
There were questions like: “Will I lose my identity? Will I lose my job if I am unable to meet expectations of new bosses? How will I keep up with new work methodologies? Will I have to start from scratch all over again? What if I am transferred to a remote place?”
While banks usually think in terms of profits and dividends, there is also a human element to mergers. While no “rightsizing” is promised by the management during mergers, they may or may not offer the “golden handshake”. Hence, employees often experience upheaval of their professional lives and undergo mental trauma.
The thought of reorganisation of top management, reduction of employee numbers and reworking salaries and benefits bring about this turmoil. Disruption is felt across tiers in the organisation as employees need to cope up with acceptance of new ideas, norms and unfamiliar styles of leaders in the management. Above all, they face the emotional impact of visualising the rupture in their familiar working relationships.

Employees go through a tumultuous transition period. Change management expert Price Pritchett in his book The Employee Guide to Mergers and Acquisitions, said there are three distinct shockwaves experienced by employees upon the news of a merger: uncertainty and ambiguity; lack of trust and protecting one’s interests.
Employees are often left stunned on news of the merger, leaving them wondering: “What will be my role? Who will be my new boss? Would I be pushed to do unimportant work?”
During the trainings, a banker was overheard telling his colleague: “I know how I have survived in the organization. I have never been able to master banking in its true sense and have been carrying on with the help of a few friends.”
The second shockwave is the impairment of trust throughout the organisation. There is always a feeling that leaders do not want to divulge any information although they know everything. Everything that is told is looked upon with suspicion by the employees. Hence they may not pay heed to what is being said.

With suspicion in mind aggravated by lack of trust, employees begin contemplating strategies to protect themselves. They engage in actions that secure self-motivated interests.

These shockwaves decrease the organisation’s operating efficiency and a new set of problems is seen over the horizon — low productivity, power struggle, weak morale, low commitment and even attrition. The management may not be able to prevent these despite sustained efforts.

Employees lack the interest to perform at their optimum level, and may become moody, resigned and apathetic. As they cannot trust the organisation’s management nor their bosses, they may confide in their significant others to give vent to their feelings. Employees get nostalgic and start brooding over old times.
It is well known too that the management, at this stage, does not attempt to scuttle or suppress this display of emotions as long as employees do not go overboard. This could be a part of the healing process for employees.
However, they do keep a watch to distinguish between those who lament earnestly or those who are simply trying to disrupt the organisation.

A session on the topic of mergers would always bring cheer on the faces of the attendees. When statements of reassurance are pronounced, their eyes gleam. We assure them that engaging in the following actions in the run up to a merger would help them tackle the angst of mergers: controlling one’s attitude, keeping a sense of humour, proactive participation as change agents, getting to know the anchor bank and its vision, generating a state of preparedness to find new opportunities for self-development, review the current situation and seek new career prospects and seizing the opportunity to tap the latent potential within oneself.

Recently, in one of the programmes held for senior employees of two public sector banks that are slated to merge in the coming financial year, the employees gave vent to their fears. One remarked: “I am worried about the actual merger of data. What if the two IT platforms are not compatible? Will we have to run the bank on parallel IT platforms?”
The senior official hastened to say that banks with similar IT platforms only had been chosen for the merger. So, there would not be any tech issues as such.
Another banker asked: “Will I be considered as a second-class citizen in the merged entity and will the employees of the anchor bank be more dominant?” Pat came the reply from another senior functionary: “In any blend, sugar is all you need to sweeten the mixture.”
By evening, two sessions on experiential learning had the employees of both merger banks mingle seamlessly. They had not realised that they were from two different banks but had indeed considered themselves as one team.

After the Merger
A time finally comes when people slowly begin to accept the reality and cope up with the new situation. They start to become productive again. The negative emotions begin to dissipate, and the attendant and emergent circumstances are viewed more objectively.
Employees become more hopeful, and more willing to give the merger a chance. They start seeking information on the potential positive benefits of the change. They become proactive and begin to give their best under the new conditions. Slowly, but surely, they learn to come around and accept reality.
There could be intermittent periods of frustrations or fear, despondency or depression, on and off but one does take things in his or her stride and moves in the direction and vision of the anchor bank.
Whatever decisions the anchor bank may ultimately take, these could be the best option for them, so one learns to be tolerant of whatever mistakes the management may make during the transition.
In the end, undoubtedly, the management will try to win over the employees, albeit this is no cakewalk. Processes will change and expectations from the management will soar. Keeping the bigger picture in mind and with a positive attitude that things will change for the better, employees need to keep trudging on. It would be worthwhile embracing the new entity without harbouring negative feelings.