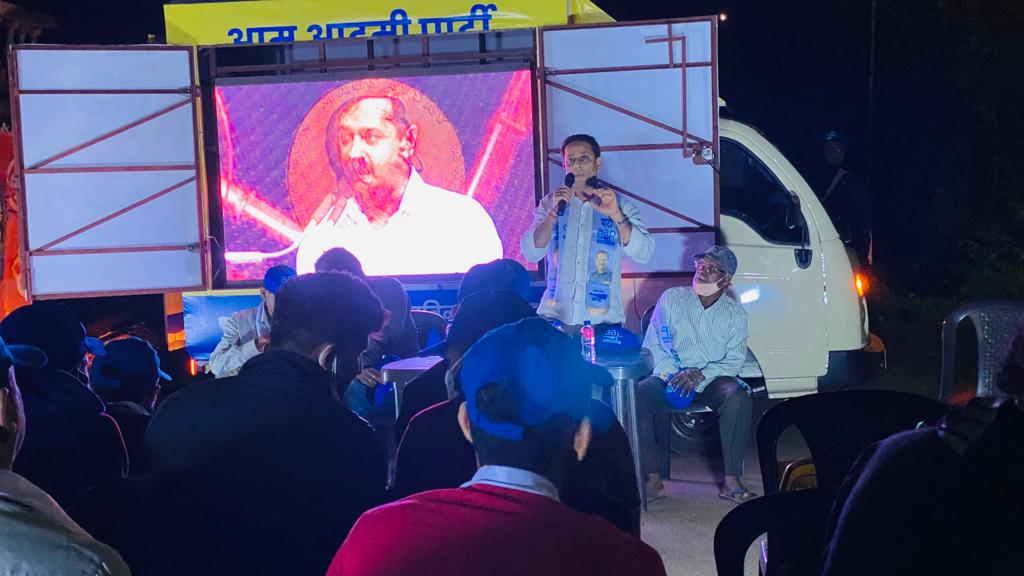 Aam Aadmi Party intensified its Parivartan Yatra across the state and the party has been receiving an overwhelming response from the people. AAP leaders held ‘Parivartan Yatra’ campaigns in Quepem, Margao, Vasco, Porvorim, Mayem, Curtorim, Calangute and Nuvem, on Monday.

While addressing the gathering in Quepem Raul Pereira, Quepem Assembly Incharge and Joint Secretary AAP Goa said, “The youth in Quepem are dejected because their elected representative hasn’t prioritized their employment. In addition to being an MLA’s chamcha, the only way to become employed in government is with money power. Residents are excited to learn that if AAP is elected to power, every youth will be given a job. AAP will eliminate discrimination and will provide equal opportunities to everyone”.

Margao AAP leader Lincoln Vaz lambasted the five-time Margao MLA for keeping the town backward in terms of development and for not resolving multiple problems faced by the locals. “Despite completing one full term as chief minister, the MLA failed to conceive the South Goa District Hospital; he left incomplete the Ring Road, education hub and other major projects of Margao”, Vaz alleged.

“As a result of the pandemic, the tourism activities like taxi operations had come to a halt in the Vasco region which is close to the port and the airport. Unlike Arvind Kejriwal, who stood by taxi and rickshaw operators in Delhi during the lockdown, taxi drivers in the constituency haven’t received government support. Youth are also finding it tough to get jobs”, said Sunil Loran, AAP leader.

AAP campaign committee member Ritesh Chodankar, “People who are residing in Porvorim for more than 10-12 years haven’t received house numbers yet. This is the major issue in the constituency. Fed up with the both parties; Congress and BJP, people have been considering AAP as the third option. People started believing that AAP is the only party which will transform Goa. As of now, AAP national convenor and Delhi CM Arvind Kejriwal has announced five guarantees for the Goans. Kejriwal is a man of words. If AAP forms the next government in the state, AAP will fulfill all the promises”.

“Mayem, located in the mining belt, has been hit hard by the mining shutdown and the present government has done nothing to avert it. The residents have incurred great losses as many of them had invested in trucks for transportation of ore, some were unable to pay the loans taken for these vehicles”, AAP leader Rajesh Calangutkar said.

Domnic Gaonkar, AAP senior vice president from Curtorim said, “The Curtorim area is a place where the government can promote hinterland tourism. However, neither the MLA nor the MP did anything to promote tourism. The MLA only cared for his own development. If he had promoted hinterland tourism, it would have benefited our youth”.

Sudesh Mayekar, AAP leader said, “Goa needs a change and AAP is the only alternative. Calangute residents want basic facilities like free electricity, water and good roads. During Covid, most people from Calangute lost their jobs and the economic conditions got worse. Once AAP comes to power, AAP will work towards the unemployment issue. We don’t want to do any politics. This time give a chance to AAP, you will forget Congress and BJP. We want to earn our seats by doing work and not by just talking”.
Nuvem AAP leader Dr. Mariano Gudinho said, “Several youths have been unemployed due to the slowdown in shipping caused by the pandemic. Nuvem lies on the coast, thus the impact of the slowdown in tourism has been significant. In this area, the taxi business is also strongly rooted. Taxi owners and their families have suffered due to the tourism slowdown. For this reason, many are looking forward to Arvind Kejriwal’s second promise regarding employment”.

Previous articleCorrupt BJP would compel youths to hit roads demanding reservation for ‘Merit’ in Jobs : Girish Chodankar
Next articleTMC leaders condemn tag of being termed as anti-Hindu, claims majority of its WB MLAs are Hindus