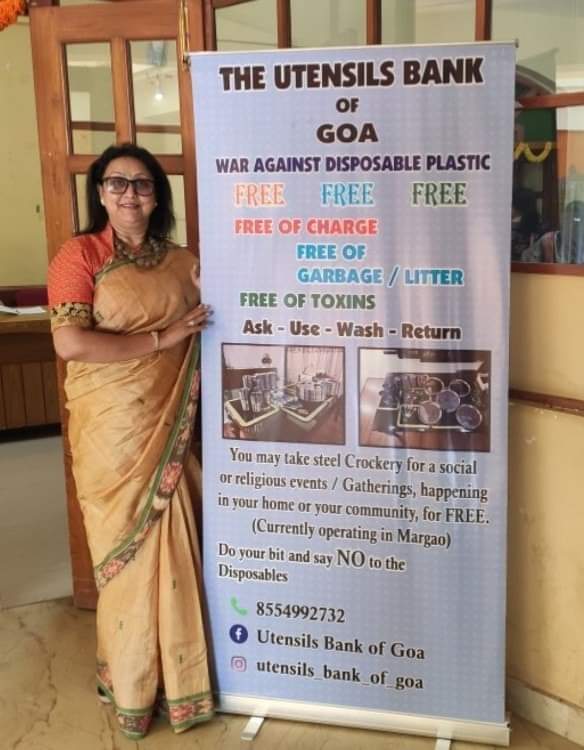 Panaji: With the rise in global pollution caused due to plastics, several concerned citizens have been raising their voices to stop the usage of plastic, especially single use plastic. But as it is said ‘charity begins at home’, Margao based Prerna Agrawal has taken a step ahead to combat usage of single use plastic in Goa by providing utensils that too absolutely FREE.

Speaking to GNH about her initiative known as ‘Utensils Bank of Goa’, Agrawal says, “We working towards making our motherland clean and pollution free. When the Sonsoddo dumpyard was on fire, Madgaonkars had to face so much difficulty because of the huge pile of waste. A lot of waste is generated on daily basis.”

“Our idea behind this initiative is to curb the waste of single use plastics, primarily from parties and gatherings where plastic glasses and plates are used. Even if there is a gathering of 100 people, roughly 100 plates and 100 glasses, all of single use plastics, are used which then goes into dump creating more waste adding to pollution,” Agrawal said.

“Keeping this in mind we thought of providing utensils to people for parties and gatherings. They can take these utensils for free and return them after using it,” Agrawal added.

At present the initiative is just limited to Margao as Agrawal has herself been handling it single handedly. But she is looking forward to expand to other parts of Goa as well. “It is not a franchise that people have to take from me. I urge people to start similar initiatives within their community so that together we can help reduce the single use plastic waste,” she opined.