Will win St.Andre with a margin of 5000 votes : Goa Forward 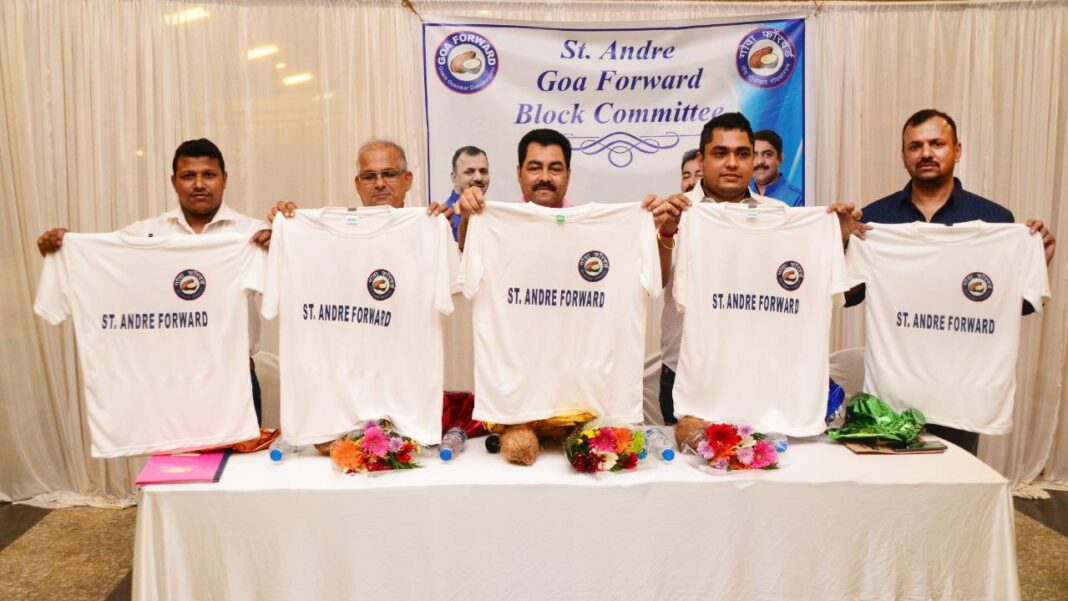 The Goa Forward Party recently held its block committee meeting in Pilar at the St.Andre constituency where the party’s Working President Kiran Kandolkar, VP Durgadas Kamat, General Secretary Mohandas Lolienkar, Employee Forward convener John Nazareth attended the meeting. While addressing the meeting the Goa Forward candidate for St.Andre Jagdish Bhobe appealed to all workers of GFP to keep interacting and reaching out to the people in the constituency, so that a constituency specific manifesto can be prepared after taking inputs from the people. “We have to do what our people want for the constituency, the GFP ethos is to practice development by consent” said Bhobe.

“For the last 20 years our people have been fooled by the incumbent MLA Francis Silveira who recently switched side to BJP and has failed even to provide toilets“ said Bhobe. “Our constituency is still backward due to the misdeeds of this MLA, the time has come for us to unitedly take St.Andre forward and save our collective future” said Bhobe.

Bhobe reminded participants at the meeting that “In 2016, just one year prior to the assembly elections, BJP had said that they would give 10 thousand jobs in Goa Shipyard but even failed to give 100 jobs for locals. Now they have come out with the same old broken record to fool our youth by saying that in this election year 10,000 govt jobs would be given. This fake BJP promise should be brought to the notice of the youth and the people of St. Andre. Have the BJP lived up to anything they say?” asked Bhobe.

Further, GFP leader John Nazareth also appealed to the workers to the unitedly work together to ensure a decisive victory. Nazareth said “I joined this party just four months ago and I have seen the tremendous amount of respect our party President Vijai Sardesai gives to the office bearers and workers of the party. We work like a family”.

“I trust and know the vision Vijai-bab and the GFP have for Goa, and I have seen it after interacting with him for the last four months. I am eager and excited to be part of this movement to Save Goa Now as one Team Goa. We need such leaders to take Goa Forward, and I appeal to you all to stand firmly behind Jagdish Bhobe who will usher St.Andre with developmental works once he is elected as a MLA. I can sense the wave of change in St.Andre; people want to get rid of this useless MLA, who has switched to BJP for his personal gains” said John Nazareth.

Kiran Kandolkar, the GFP working President
addressing the workers said that “we have to work unitedly to win the seat. I am sure the way you are going ahead we will win St.Andre with a margin of 5000 votes.” “This constituency lacks development and the only way to get development here is to elect Jagdish Bhobe as your MLA” said Kiran Kandolkar. Vice President Durgadas Kamat said that Party President Vijai Sardesai would be soon touring St.Andre constituency to meet the citizens. He also informed that in coming days many youth and
local leaders would be embracing the party to strengthen the hands of Goa Forward candidate Jagdish Bhobe to take St.Andre forward.