Sportspersons toil in sweat and blood, Govt. floats in a sea of lies :AAP 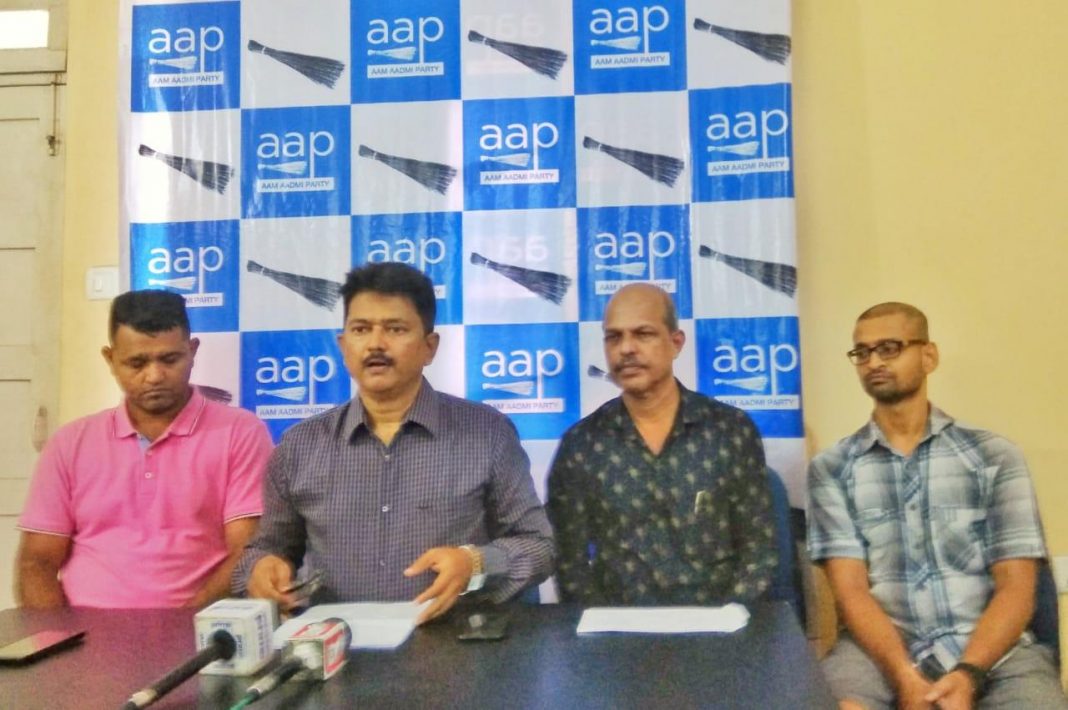 The Aam Aadmi Party came down heavily on the government accusing it of complete failure in doing anything worthwhile for sports in the state, so much so that it is now being humiliated by accusations of lying made by Indian Olympic Association. Addressing the media AAP Convenor Elvis Gomes, who himself has held the reigns of the SAG and GFDC, said that the state of affairs preceding the conduct of Lusofonia games was repeating, with the national games becoming a farce and exposing government’s of doing practically nothing for the sportsmen. Gomes said that forces at the helm of affairs were busy calculating the commissions that were receivable rather than getting the work done upfront, and said that the government needs to be investigated for it’s failure in honouring national commitments and wasting tax payers’ money while, the sportspersons were toiling in sweat and blood but losing out on their precious peak performance years.

Gomes said “The CM might have been in the dark about the national games. But he has a duty to tell us how is he going to tackle these serious allegations of the Government being accused of lying, which reflects very poorly on the Goa administration. Otherwise it will be proved that indeed your Govt is full of liars out to make money at the cost of sportspersons’ careers.”

Touching upon a host of issues, Gomes described in detail how the ignominy of facing accusations at the hands of the ACOLOP one year prior to hosting the lusofonia games had set the then-Parrikar Govt in motion. He said that national games scheduled to be held in 2011 are still uncertain and everyone is clueless even now.
Gomes said that the manner in which grants were given selectively was a fit case for legal challenge, which AAP would take up. “Adv. Rahul Mehra who is leading a relentless fight against malpractices in sports by governments and sports federations is our party member. Infact today the Delhi High Court will hear him on the Sports related matters. I will consult him in unearthing the mess that has been made by the Government here,” said Gomes. He displayed letters written by him as GFA President demanding support to all village-level clubs and said that the Government ignored his request and ended up giving grants to just one club. Even the consultative committee of 3 cabinet ministers that was appointed when the then-CM was on treatment, failed to take up the case. “ These Ministers and MLA’s are often seen as Chief Guests at Village level tournaments and make tall promises, but are incapable of doing anything for the village-level clubs” said Gomes

The former SAG and GFDC director then attacked the Government on the issue of selectively giving grants to certain individuals and clubs. He asked the government to declare the names of the persons who were responsible in recommending financial assistance to individuals and just one football club, and the method followed in awarding sums ranging from Rs.25 lakhs to 6 crores. “Tax payers money is looted in the name of Sports. 6 crores have been released to just one club as if other clubs are dead. Again the Government has suppressed information and dished out a big lie. The same Club has been paid few crores more huge from the GFDC too and the trainees who have been trained through tax payers’ money have been made to play for the said Club to show that the club is running a youth program. There are other big and small clubs that are employing players as well as developing them. What about them.?” questioned Gomes.

Gomes said the CM owed an explanation to his claim that Yash Fadte who had excelled at the highest level in the Junior category in sports was under consideration for grants. “Who guides you in these matters CM? Such utterances will play on the mind of the budding youngster rather than help him to play. And how do you decide on who deserves and how much ? First cleanse the corroded system before you invite more curses from those struggling to make it big in sports. If need be, disband SAG and GFDC and entrust the affairs to a Trust that will win the trust of the sportspersons.” said Gomes

AAP General Secretary Pradeep Padgaonkar taunted the Government to come clean on the whistle blower peon in the sports department who had exposed corruption at the highest level. “Why is it that no one is talking about the various scams? Is everything settled ?”asked Padgaonkar stating that a petition in the Court may be the only solution as mass migration of the opposition into the BJP would help corruption grow big time in the state. “Even Goa Olympic Association President Shripad Naik is silent as usual. All are part of the same fottingponn “ said Pradeep . North Goa AAP Convenor Sunil Signapurkar also echoed the sentiments about discrimination in sports.