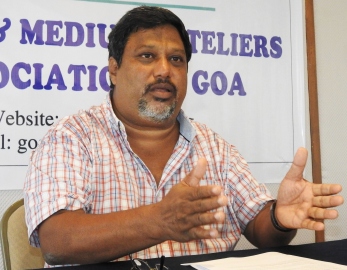 Team
- Advertisement -
Panaji: Small and medium Hoteliers Association (SMHA) of Goa Serafino Cota critisised the government for not putting up the tourism policy in public domain and demanded that the Board should comprise of personnel who have knowledge about tourism.
Addressing reporters Cota said, “We neither support nor oppose the tourism policy as the government has failed to put it in public domain. We had demanded for tourism board and tourism tribunal. But government is yet to consider the same. To get early justice tourism tribunal is must. And brand Goa can be promoted with this.”
“Board which consists of six government officers is a waste of time and money. There should be people with knowledge of tourism. Members of hotel owners, taxi owners, shack owners, tour operator should be inducted in Tourism Board or it will be like tiatr academy,” Cota mocked at the government.
Regarding hotel occupancy Cota said that the chief minister is being bluffed by  somebody. “CM must be projecting a rosy picture of Goa. Actually it is 27 to 29 per cent. Tourists are coming to Goa are occupying gated community. And are making a loss to Goa govt. As they are not paying any taxes,” he added.
Share
Facebook
Twitter
WhatsApp
Linkedin
ReddIt
Email
Print
Telegram
Previous articleCOVID19: 321 new cases, total cases cross 40 k mark
Next articleWorld Food Day 2020 Celebrated
- Advertisement -

Goa Forward Party Chief Vijai Sardesai has said that the Govt would be exposed by his party in combination with a united opposition in...
Read more