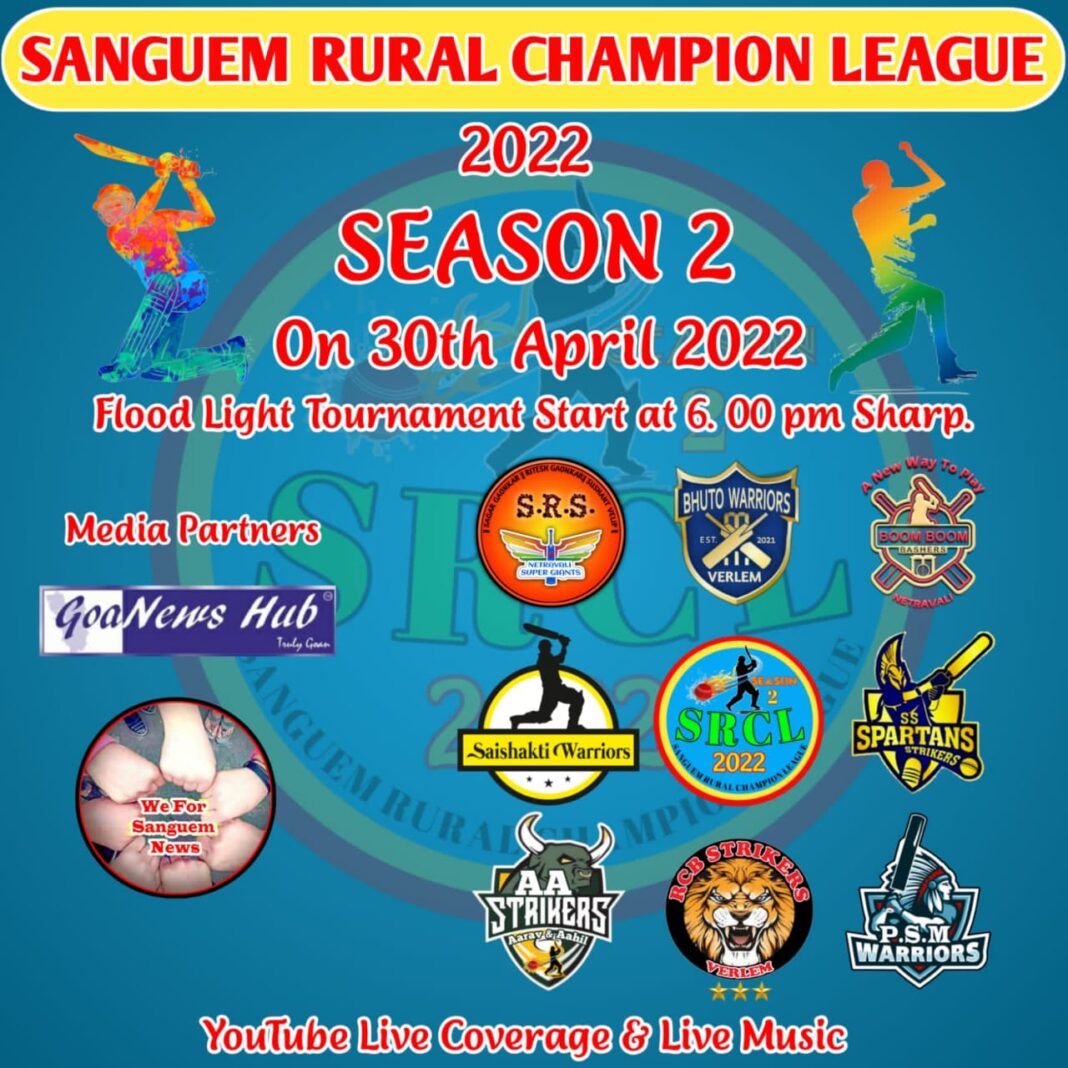 The summer of 2022 in Sanguem is all set to become more memorable. Do you know why? Well, the cricket loving Sanguemkars are going to be in for a treat come April 30, 2022.

Yes, the excitement is palpable in the air that we Sanguemkars breathe. But what is the excitement all about? To cut a long short story, the second edition of highly appreciated and the most eagerly awaited Sanguem Rural Champions League 2022 ( SRCL 2022 ) is just round the corner.

The wel-known forum “We for Sanguem” convened by Sanguem’s popular social worker and video journalist Shri Amit Naik successfully organised the first edition of Sanguem Rural Champions League 2020-21 that received tremendous love and encouragement. Now this tournament SRCL is back with a bang.

SRCL 2022 is scheduled to commence from 30-04-2022 i e. Saturday to make the weekend as memorable as possible. The cricket tournament SRCL was originally launched with a view to promoting cricket across the rural villages of Sanguem that boast of quality cricket players who do not shoot into limelight owing to lack of opportunities and formidable platforms.

What is special about SRCL is that cricketers from panchayats like Netravali VP, Vaddem Kurdi VP, Kavrem Pirla VP, and Bhati panchayat of Sanguem are picked up for respective franchises through auction in which franchise owners participate and bid for talented cricket players for their respective teams.

This time around the cricket teams that are participating are well-prepared and looking to leave their mark in keenly watched and highly entertaining tournament SRCL. All eyes are on these eight teams namely S.R.S., Saishakti Warriors, AA Strikers, Bhuto Warriors, RCB Strikers,S&S Spartans Strikers, P.S.M. Warriors and Boom Boom Bashers Cricketers.

The stakes are pretty high. The team that wins the SRCL 2022 tournament will walk away with a cash prize of ₹ 1,11,111/- with winner’s trophy.

The best batsman will receive a cash reward of ₹ 5,000/- along with trophy.

The best bowler will be awarded a cash reward of ₹ 5,000/- along with trophy.

Apart from this every game’s man of the match player will stand a chance to win a special medal.

This is not all. The razzmatazz of SRCL 2022 will be covered live on YouTube Channels of our media partners GoaNewsHub and We For Sanguem. The icing on the cake will be live cricket commentary from famous commentators of Sanguem to tickle the funny bones of the spectators. Every run, every boundary, every six, every wicket and every victory will strengthen the bond of unity amongst Sanguemkars.

The organisers of SPCL 2022 urge every sports loving Sanguemkar to turnv up at the playground and encourage his or her team by rooting for it. Let the fun begin on 30/04/2022 from six pm onwards. How’s that for a big six? See you soon.