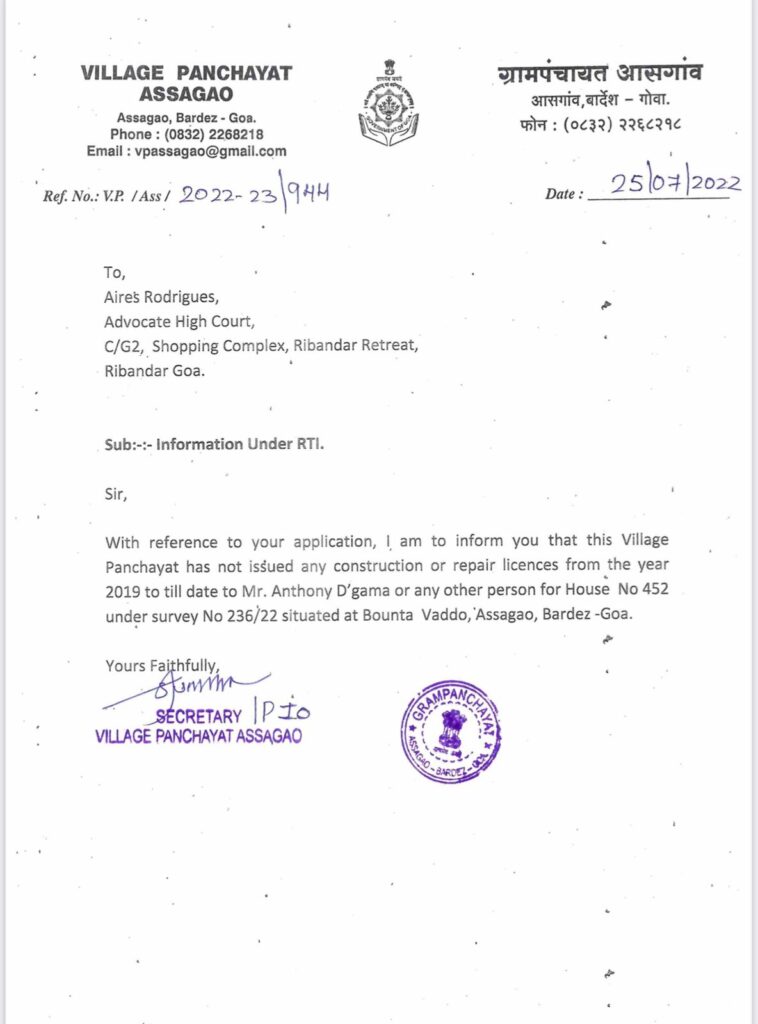 The “Silly Souls Café and Bar” at Assagao allegedly being run by the family Union Minister for Women and Child Development Smriti Irani’s family was illegally built without obtaining any construction licence. This has been revealed in the information furnished to Adv. Aires Rodrigues today under the RTI Act by the Assagao Panchayat.

With the Panchayat confirming that no construction licence was issued, Adv. Aires Rodrigues has today filed a complaint before the Director of Panchayat (DoP) seeking action against the illegally built restaurant.

Drawing the attention of the DoP that within the jurisdiction of Assagao Panchayat in Bardez at Bouta Vaddo in Survey No 236 Sub Division No 21 & 22 a huge illegal construction has come up including a compound wall, Adv. Rodrigues has stated that the construction activity which reportedly started in 2019-2020 is now a huge Bar & Restaurant under the name of “Silly Souls Café and Bar” and that it was pertinent to note that Sub-Division 21 was a tenanted field which has been illegally filled in absolute breach of law.

Stating that all this construction has been done without the required approval and permissions from the concerned authorities including the Panchayat and that any illegal construction cannot be issued for any activity, Adv. Rodrigues has urged the DoP to direct the Assagao Panchayat to immediately seal the entire illegal structure and to take necessary steps as per law to demolish the illegal construction and prosecute the persons involved in this blatant illegal activity done in violation of law.

Acting on a complaint filed by Adv. Aires Rodrigues the Goa Excise Commissioner Narayan M. Gad last week issued a Show Cause notice on the validity of the Excise licence issued to Silly Souls Café and Bar and fixed a hearing on Friday 29th July 2022 at 11 am.