Valpoi: In Valpoi Town, the numbers of outsiders are increasing day by day. According to the locals, the migrants are coming in large numbers and building houses in the Government Revenue land in Ansulem, Redeghati and Nagvem village. The Valpoi Municipal Council body is helping them to build the houses in Revenue land, later on giving them NOCs and licenses at priority level and making them their vote bank since last one decade. 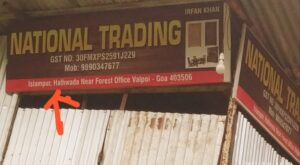 The real Valpoikars, who have resided in Valpoi Town for many generations and had fought with the portuguese regime, have now become refugees in their own ancestor soil. Real Valpoikars are neither getting the NOCs for their houses nor getting the trade license to start a business in their own town. They are being harassed by the Valpoi Municipal Council Body, especially the Vice Chairperson and Chairperson. The Non Goan, migrant people are getting all NOCs and licences immediately without having proper documents, say Valpoikars.

While another local said,”The migrants are coming to Valpoi town and building houses in Ansulem, Redeghat and Nagvem village in Revenue land. They disturb the ecosystem by cutting down the ancient trees with the help of councilors, who have ruled the Valpoi Municipality for the past many years.”