Pramod Sawant doesn’t have money to help Goans, but will still not collect taxes from Adani. – AAP 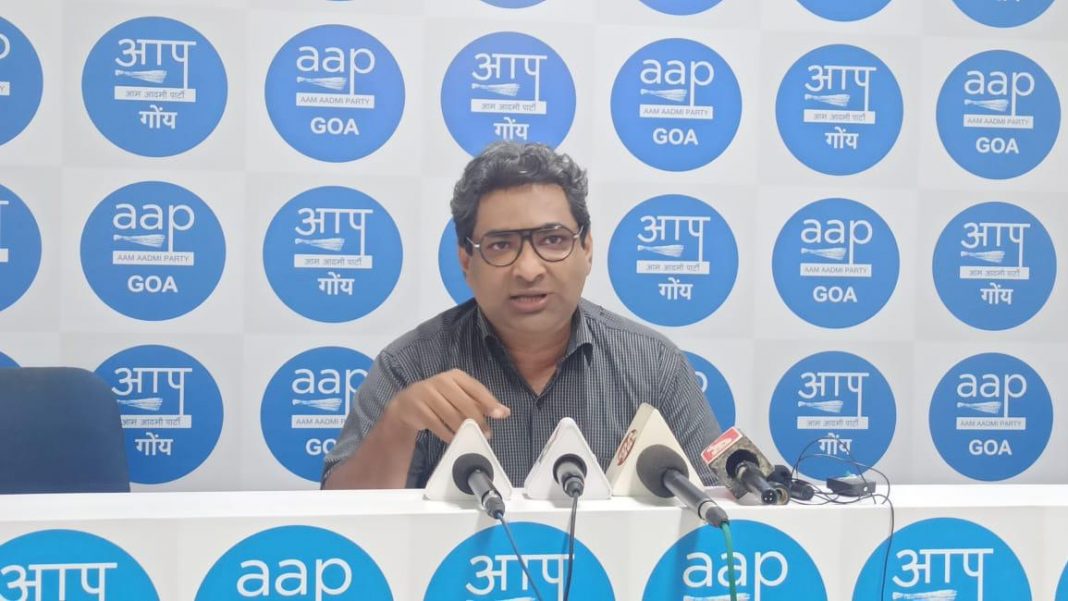 Panjim, AAP has strongly criticized the denial from Adani and Jindals to pay the ‘Goa rural improvement and welfare cess’. Adani has taken a stand before the State’s transport department that there is no pollution caused during coal handling as they take all precautions while transporting the coal.

We have been saying that Government is working in the interest of Adani, the denial to pay for the pollution cess is an addition to it. BJP is known for working for the interest of Adani and has never shown any sign of empathy towards the Goans.
“AAP has filed a complaint on 1st of August before the Anti-Corruption Branch (ACB) asking for registration of an FIR against Adani in the evasion of cess under the Goa Rural Improvement and Welfare Cess Act of 2000. Our complaint was based on the findings of Comptroller and Auditor General (CAG) that an estimated loss of Rs 300 crores was caused to the State at the beginning of 2016 on account of non-recovery of the cess, which is now estimated to be around 1000 crores. Why Government is not taking any action against Adani? Whose interests are served? Why Goa’s taxpayers should bear the burden of 1000 crores and not Adani?”, said Rahul Mhambre.
Why Government is ignoring the observations made by CAG? Is BJP involved in a larger scam? How much money they have got for not taking action against such evasion?
Goa is under huge debt nearing Rs.20,000 crores and its been almost 10 years for BJP Govt in Goa but there are no signs of debt reduction, rather borrowing has become a norm for this inefficient BJP Govt. Has the BJP Govt completely lost interest in the welfare of Goans?
“BJP Govt is completely inefficient. The state is cash strapped and BJP is to be entirely blamed for it. It is their inefficient financial management and vested interest with Adani which is pushing Goa into an economic mess. Had they been working for the interest of Goans rather than Adani, situation would have been much better. Evasion of 1000 Crores is directly affecting Goans and benefiting Adani. The priority of Govt should have been to make Adani pay the cess rather than allowing him to make money at the cost of Goans.” Said Rahul Mhambre
To deal with the financial crisis Goa’s BJP Govt is on the spree of reducing or deferring the benefits of public schemes.
1. they have cancelled the Housing Building Allowance for government employees
2. they have not made the monthly payments under griha adhar and DSSY for last 6 months
3. they rolled back inclusion of DDSSY scheme for COVID treatment in private hospital,
4. non payment of pension of sea farers
5. and now the government has notified the amendment in the Ladli Laxmi scheme which will reduce the income criteria of parents of the girl. With the amendment, the girl child of nearly most of the goans will out of the social security scheme.
“Digging into the pockets of the Goans and filling the pockets of Adani, BJP’s economic policy is in the interest of Adani, which is purely anti-Goan. On one hand you allow Adani not to pay cess and on the other hand you mint money by creating burden on the pockets of Goans. This is nothing less than a day light robbery.” Said Rahul Mhambre.
We have been continuously exposing that how Sawant led BJP Govt works for the interest of Adani and not Goans. We will keep reminding BJP that ‘Goa is for Goans and not Adani’.

Previous articleSharing patient’s feedback, Health Minister lauds healthcare workers at GMC
Next articleSome leaders from my own party had filed case against me: Ramesh Tawadkar