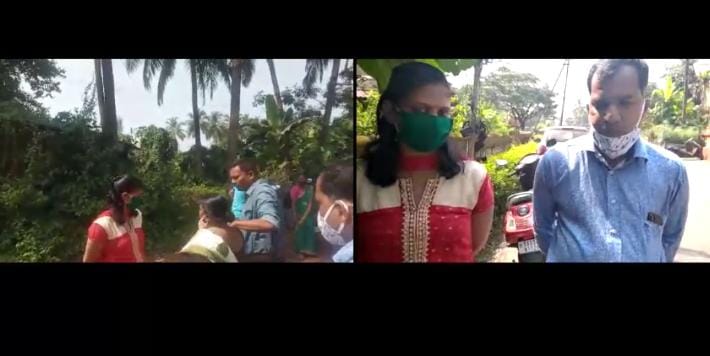 Porvorim: The residents of Succoro are agitated over the protection given by the state government to illegalities of land grabbing in their area by BJP leader and his wife, who has been disobeying all the laws.

The letters written by locals to State Vigilance Department, Chief Secretary, District Collector and Director of Panchayat has evoked no response, triggering discontent amongst the locals.

Kartik Kudnekar, who is BJP’s Zilla Panchayat candidate along with his wife, Kirti, who is a panch member, have been involved in illegally grabbing the land and constructions, without obtaining any mandatory permissions and in connaivance with the local panchayat.

In a letter by Soccoro resident, Mr. Suhas Morajkar, complainant has pointed out these illegalities to the authorities, but there has been no response, clearly indicating that BJP led government has been in support of these activities.

Suhas Morajkar, in one of the letter, has said that there is an encroachment land of near wadakaden junction land in, Porvorim, owned by Communidade of Serula, which has been illegally grabbed by Kartik Kudnekar.

“It has been noticed that a concrete structure has been built on the said property and is currently utilized by kartik, husband of the panchayat member for his personal benefit.”

Suhas said that the structures are built and are in operation in the form of a rectangular restaurant oddly located and creating an ideal accident prone zone.

In yet another letter, Suhas Morajkar has said that there is an agricultural land bearing survey no 56/12 in Porvorim tisk bazaar, owned by Communidade of Serula, surrounded by shops on either side.

“As per the records of Communidade of Serula, the said property was never granted to any person nevertheless Kartik Kudnekar land which is owned by the communidade of serula.

He has pointed out that the necessary procedure for transfer of land to a private person is not compiled. Therefore, the said are also in violation of the Code of Communidade. In addition, the said transfers are illegal and are made using Kirthi Kudnekar’s position and power.

He has said that a concrete structure has been built on the said land and is currently utilized by Kartik Kudnekar, husband of the panch member of Succoro Panchayat, for his personal benefit by renting the said concrete shops to illegal migrants there by giving them voting rights in the state of Goa.

The locals have demanded that the authorities should take stringent action against the illegalities which will send a clear signal that law is enforced in the state.