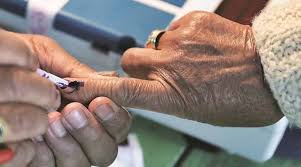 Porvorim: The voters in Penha-de-France and Succoro Zilla Panchayat constituency are showing a clear trend in favour of candidates fielded by local MLA Rohan Khaunte even as the other political parties have ganged up to defeat his contestants.

The ZP polls have come when Khaunte has been firing salvo against the BJP-led government while the ruling party has cobbled understanding with Congress in this constituency. Khaunte has been a common target for both the parties.

What is interesting is that BJP candidate Radhika Sawant has her husband Gopal Sawant supporting the Congress party. The alliance within the parties is considered as a joint venture against Khaunte.

The constituency has been on the boil recently with the shortage of water supply being the focal point for the voters to rally behind Khaunte while the law and order has also been highlighted as one of the failure of Sawant-led government.

BJP, which has been contesting this assembly segment with all the might, has not been able to make a mark since 2012. The BJP cadres in this constituency has seen major changes in the leadership with Succoro sarpanch Sandip Vazarkar emerging as one of the prominent leader. The recent raids by Enforcement Directorate in connection with the Serula Communidade and subsequent public reaction will also go against the party.

Succoro ZP candidate of BJP Karthik Kudnekar was embroiled in the controversy recently after several bogus voters were traced in his ward, some being found in his neighbourhood. The locals have filed a formal complaint with the Election Commission of India (ECI), expecting a quick course correction to ensure that the sanctity of the polling is maintained.

The involvement of Kartik in illegal filling of land and also encouraging illegal dwellings will also work against him in this ZP election as the locals have often expressed their angst against him.

ZP candidates of congress are also going to feel the heat as they went hiding during peak COVID-19 time when Khaunte was busy providing amenities and medical support to the people.

The polling on December 12 is expected to be a vote against the ruling government considering the way the constituency has been forced to face the consequences for being in opposition.