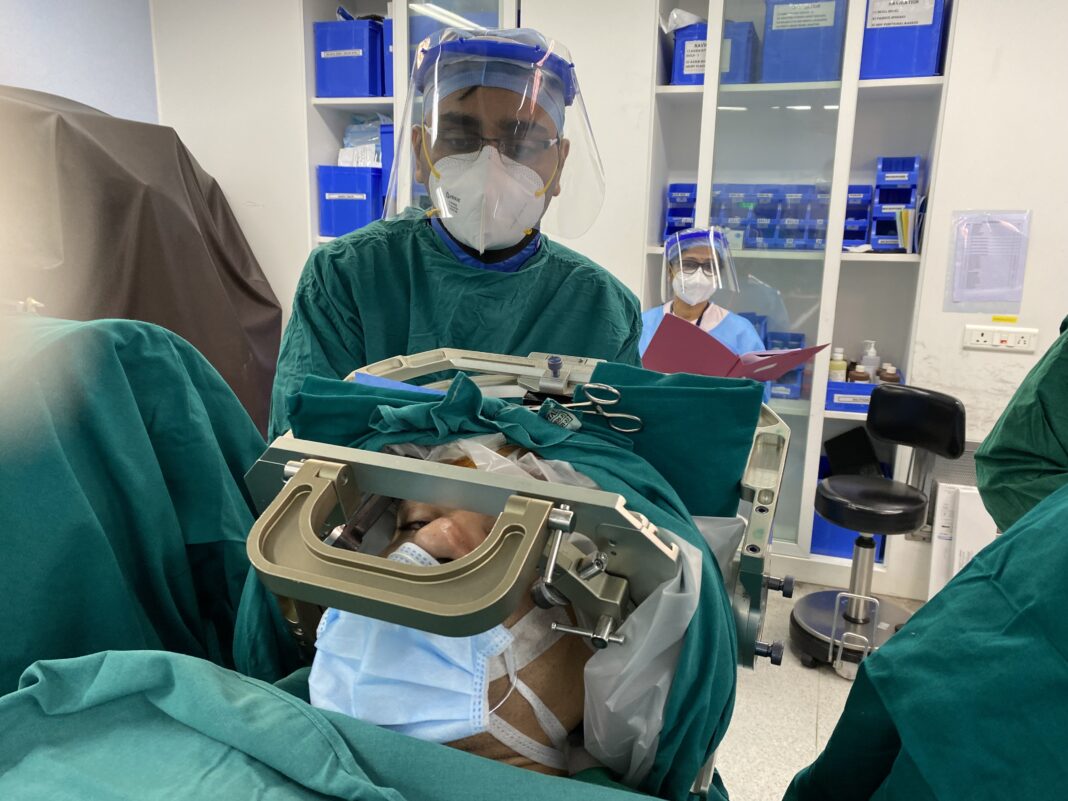 The patient, Mr Harikrishna, contracted Parkinson’s disease at a very young age. Over the past seven years, he had been managing his medications and had reasonable control over his disease. Unfortunately, since the past two years, his conditions worsened, wherein his hands and legs would become stiff like a log, toes and fingers would curl up and cause severe pain. This was mostly eased through medications, but at times even medicines would not work. These medicines came with another set of side effects called dyskinesias.

The surgery involves implantation of an electrode into the specific target nucleus of the brain and is now a well-established therapy for patients with advanced Parkinson’s disease. Jaslok Hospital and Research Centre has been performing Deep Brain Stimulation Surgery since 1998 and has conducted over 550 deep brain stimulation surgery till date. The surgery is essentially done under local anesthesia. The patient provides feedback during operation about the amount of improvement in their clinical symptoms. Post-surgery, the patient undergoes pacemaker programming to control the symptoms of Parkinson’s disease. As the patient begins to show signs of improvement by the deep brain stimulation electrodes, the medications are reduced. Jaslok Hospital has several patients who have been off medications after a safe DBS surgery.

Sharing his thoughts, Dr Paresh Doshi, said, “Jaslok Hospital and Research Centre has been performing Deep Brain Stimulation Surgery since 1998. This surgery has been practiced over the last 20 years and is now a well-established therapy for patients diagnosed with advanced Parkinson’s disease. We are extremely proud for being the first in the Asian region to have done a successful surgery using Percept PC and are sure that this will change the course of Indian patients suffering from Parkinson’s. We truly hope to be able to help them live a better life.”

Recently, the results of the 520 surgeries done by Jaslok Hospital were published, which proves that the complication rate at Jaslok Hospital is one of the lowest in the world.

Previous articleEdelGive announces the launch of the GROW Philanthropic Fund, a first-of-its-kind initiative aimed at building the strength and resilience of 100 Grassroots NGOs across India, over 24 months.
Next articleRG working to conserve water bodies