How TMC’s Yuva Shakti is different from CMRY? 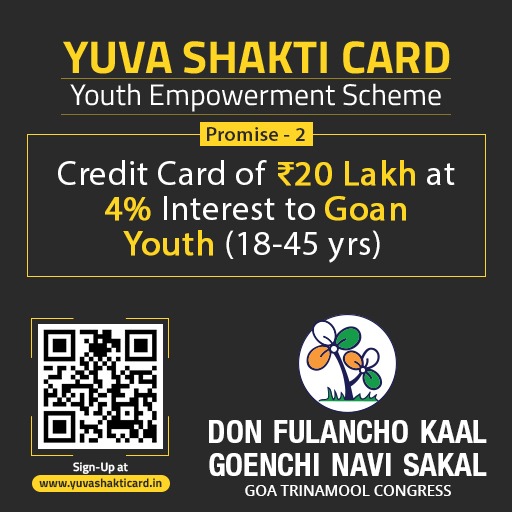 Every year about 1200 students graduate from across Goa’s top 7-10 engineering colleges. Budding with fresh ideas and prospects for an uncharted future, these youth form the cream of the state’s ‘demographic dividend’ – an economic prospect defined by the United Nations Population Fund as a boost in economic productivity that occurs when there are growing numbers of people that enter the workforce.

India’s post-liberalised economy previously banked on the organised job market to absorb this demographic. However in the last decade there has been a considerable shift in this socio economic and business dynamics, where modern education coupled with the high penetration of the internet, has resulted in facilitating *not just job seekers, but also job creators*. Estimates suggest that 10-15% of the youth graduating from management and engineering colleges across the state fall into the latter category of being ‘job creators’. Consequently, start-ups, entrepreneurial ventures and independent business practices have shot up.

Unfortunately, with a dismal support infrastructure that has failed to keep pace with this shifting trend among the youth, in Goa alone more than 1 Lakh youth are registered with the Goa Unemployment Exchange. Furthermore, given the state’s economy is heavily tourism dependent, the last two years of Covid incurred losses have dealt a severe blow to the state’s economy. Job losses from the tourism sector alone are pegged at around 1.2 lakhs.

According to Rajendra Kakodkar, a senior economic analyst who is known for his ear-to-the-ground approach, prevalent schemes like CMRY, which have been operative in the state for over a decade, have decidedly failed to address these concerns. Multiple collateral requirements coupled with complex eligibility criteria, are usually cited as some of the key deterrents. According to the Goa Economic survey, under the CMRY scheme between 2017 and November 2020, a total of 915 recipients were sanctioned for the loan, with a total of Rs 23.16 crores sanctioned – of which an even lesser amount – Rs 20.78 crores were disbursed.

“For startups, raising equity is very complex and debt is next to impossible. They have to depend only on PE funds. The probable job creator gets fagged out with the tidious presentations and finally abandons startup and becomes a job seeker. The state loses a job creator and he becomes burden on the job market.” – a lose-lose, adds Kakodkar.

The Chief Minister’s Rojgar Yojna (CMRY) – a loan facility that offers financial assistance of upto 25 lakhs to individuals of Goan origin between 18 and 45 years of age, was instated as long back as 2001. Amongst some other larger complications, the scheme has changed its name a few times going back and forth between Chief Minister’s Rojgar Yojna and “Dr. Verghese Kurien Rojgar Yojana”. The scheme in its latest form provides project finance of upto Rs 25 lakhs, with an interest rate of 8% p.a. for male and 6% p.a. for female beneficiaries. Amongst the collaterals required are immovable assets, for a loan of over Rs 6 lakhs, a 15 years of residence proof and furthermore the loan has a debilitating income capping of families who earn less than Rs 10 lakhs p.a. Exclusion error, which happens to be the most common reason for failure of most well-meaning welfare schemes in this country, also plagues the CMRY.

TMC’s Yuva Shakti Scheme is designed with the objective of overcoming these very issues – a credit assistance facility which promises a collateral free loan of upto Rs 20 lakhs at a meagre rate of 4% p.a., the scheme aims at creating economic sustenance in the state. Its most attractive feature – the collateral free facilitation is also inevitably the one drawing the most criticism. Considering Goa’s economy is already riddled with debt, questions like whether it will further plunge the state into further economic ruin are commonplace.

Kakodkar however takes us back to the idea of ‘job creators’ to explain the workings of this. The beneficiaries of the loans are individuals who are likely to create goods and services and employment, which in the economic parlance will roll back into the state’s economy through consumer spending and government revenues. The YSC scheme has been designed with sound financial planning. With a budget outlay of Rs. 1080 crore per year, the scheme is poised to expend a total of 4% of the state budget. In its execution, the TMC government (once elected) will partner with a consortium of banks to enable this credit facility. Typical bank interest rates stand anywhere between 8-14%, of which the government will pay interest over and above 4% that the beneficiaries would be paying. More importantly the government will act as the guarantor and the beneficiaries would not need any collateral which has been proven as a key reason for the inaccessibility of bank credit. Given that the initial years are usually the most significant while also being the most taxing for any new business, such a scheme is expected to provide a relief from financial anxiety and lower the inability to pay back  – a consequence that has been proven globally to better entrepreneurial prospects.

As for the questions about a collateral free loans to less experienced youth, ending up into NPAs Rajendra Kakodkar, an Equity Researcher laughs it off – “if that is the faith people have in the capabilities of youth coming out of IIT, NIIT, BITS GEC etc people seem to agree that the double Engine has destroyed the level of education and both these engines need to scrapped for newer ones. Yet let us evaluate the worst case. Total burden on the exchequer is pegged at 4% of the annual budget outlay; which is miniscule compared to 35% cut ministers are siphoning from the budget. Studies show that the recovery rate for such loans is around 90% and even in the worst case scenario the money will be invested in the skill development of youth, instead of going into the pockets of the ministers and their cronies.”

Therefore, one way or another, the money will eventually come back into the state exchequer – because even if the businesses fail to pay back, they are ultimately appending in the creation of more jobs statewide and contributing to the circulation of not only funds, but also goods and services within the state, inevitably setting into motion an economic spurt. For a state that has been in the throes of economic stagnation, this is a cogent way forward.

(writer bio: oishorjyo is a writer-researcher who lives and works out of Goa. they write on the themes of social issues, environment and gender.