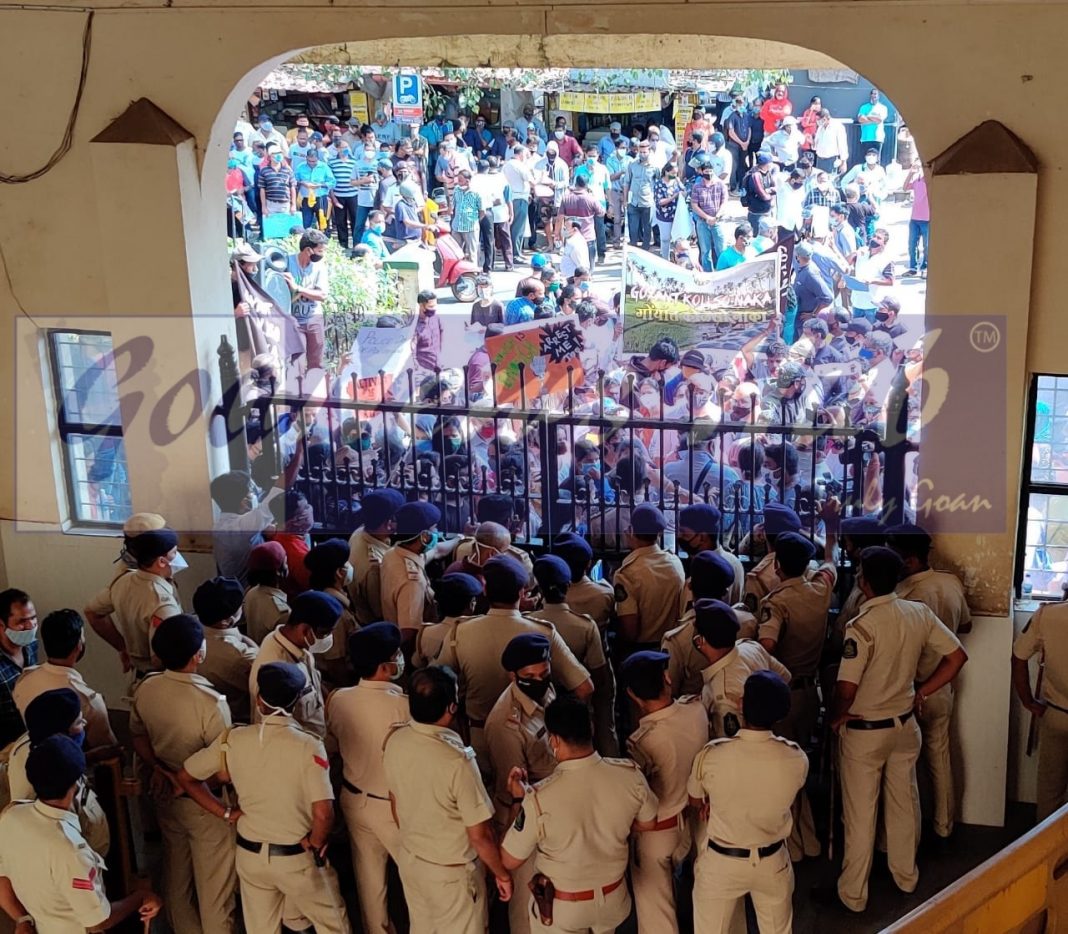 Today hundreds of anti-coal agitators gathered outside South Goa Police Headquarters in Margao after two of the leaders who participated in Chandor agitation were summoned on Friday. The three mega projects in and around Bhagwan Mahaveer Wildlife Sanctuary and Mollem National Park in Goa have caught national limelight for all the bad reasons. Goans at large believe these projects will do more harm than good.

These projects include  the four laning of the NH4A, double tracking of the railway line and the laying of a 400kV transmission line. These projects will lead to the felling of around one lakh trees in Goa and Karnataka, of which a minimum of 59,000 trees will be felled in Goa. Moreover activists also believe the double-tracking of railway is infact to facilitate the transport coal which will make Goa into a Coal-Hub.

Goa News Hub interviewed youth leaders across Goa asking them what they feel about the on going project. While some opted for a sustainable development others were completely against the project.

Deepali Desai, an independent writer opines people of Goa are asking the government why are they are ignoring public opinion? “It has now also come to light that Environment Impact Assessment report has some discrepancies,” says Desai. Speaking about the environmental damage these projects are going to cause Desai asks, “I would like to ask are we perceiving development only by concrete infrastructure? If so by felling of approximately 60,000 trees aren’t we causing major harm to the whole ecology? Just the animals are not biodiversity but it also involves birds, insects infact every living organism. What are we ensuring for our future generations. Most of the government’s projects ignore the environmental threat. By ruining and damage the wildlife and sanctuaries, trees we are making ourselves  prone to future natural disasters and diseases.”

“I am happy youngsters are raising voices by spearheading Save Mollem movement. It’s a people’s movement to save Goa’s present and future. The disastrous triple project is threatening the whole Area covering two wildlife sanctuaries. What is this for? The transportation of coal? The government has no answers whether the HT power line are really needed. The tone and tenor of the goverment is anti-people,” concludes Deepali Desai.

Krubeshwaran a young budding advocate believes in a more sustainable development where a balance can be attained between development and compromise to the damage which we otherwise keep causing to nature in the name of development. He believes there definitely has to be development but not at the cost of damage to environment to the extent that is proposed .

“I’m of the firm opinion that maybe one out of the 3 projects proposed could be proceeded with . For instance – if the doubling of railway track cannot be done elsewhere except by passing through the Bhagwan Mahaveer Wildlife Sanctuary then that could go on but again with minimal damage caused to the environment , however the four-laning of NH-4A could instead be diverted through a different route . Similarly , regarding the laying of a 400kV transmission line – I don’t think it needs to be laid there itself by causing such immense damage to the environment & wildlife” Inferred Adv. K. Krubeshwaran

Ahraz Mulla youth leader and National Students’ Union of India (NSUI) State President of Goa believes the projects are politically motivated. “Conserving the forests is the need of the hour,” says Mulla.

He slammed the government who are the promoters of these projects, “The BJP government is fooling the people by saying that these projects are for the development of the country, but in reality it is for the development of their bank balance. It is very motivating to see the youth across party lines come out in large numbers and protest for one aim.”

While CM of Goa Dr Pramod Sawant seems to have taken a soft by talking about 50% cut in coal handling but he seems to be tongue tied on double-tracking. The Goans await a concrete solution to the three mega projects which will cause much damage to environment.