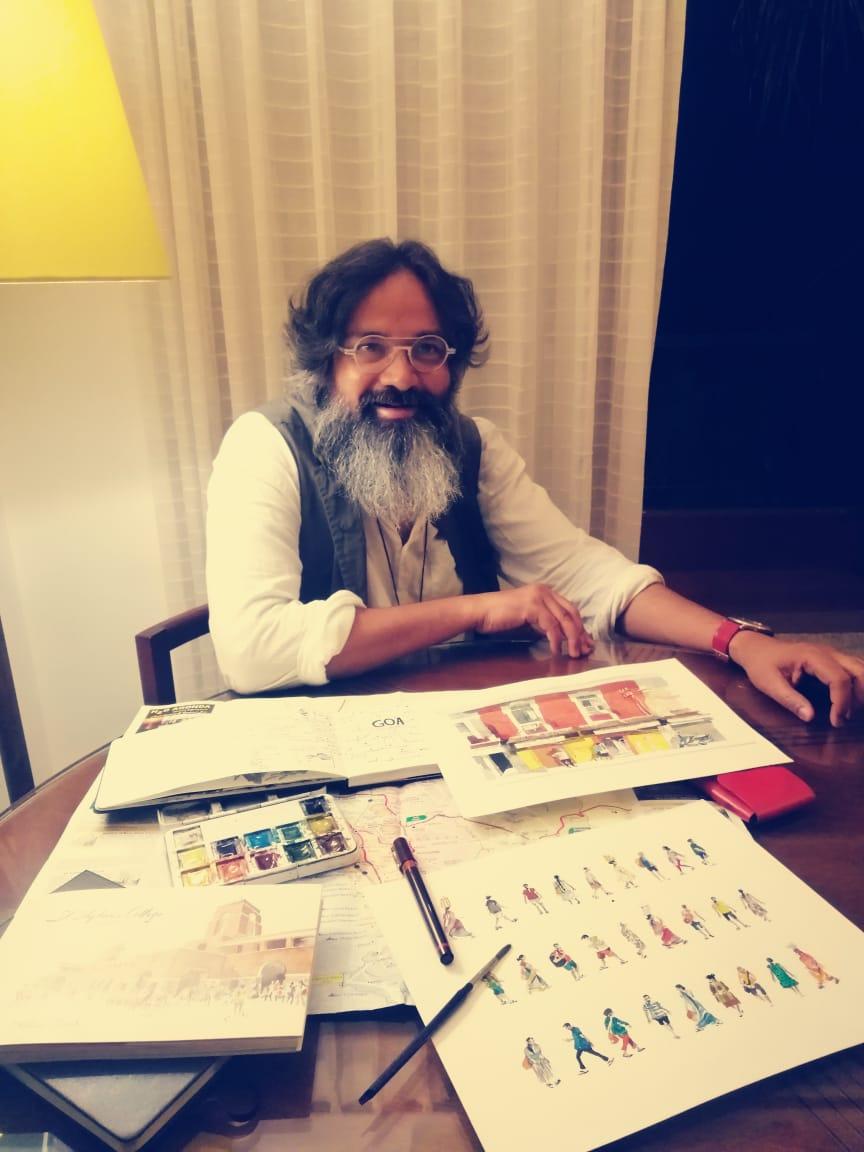 Calangute: Goa will enter the list of cities in Germany and Gujarat which will have its own sketchbook depicting the culture, heritage and the people of the state.

Germany-based Indian born artist and illustrator Allen Shaw has been going around the coastal tourist state picking up the elements which will be used to piece together “Goa Sketchbook.”

“I have already done Ahmadabad sketchbook three years back, I did sketchbook on Rajkot (two years back) and Morbi last year. Then did one on St Stephen’s College in Delhi,” said Shaw, who has been regular visitor to the tourist heaven since last 12 years.

His project on Goa sketchbook will go along with his two of his similar projects one on Erlangan city of Germany and next one is Berlin.

“I have been coming to Goa for last 12 years almost every year. I call it ‘Goa pilgrimage’ because I like coming to Goa,” said the artist, who traces his origin from Bihar and claims Goa-based illustrator late Mario Miranda as one of his early inspirations.

Shaw has been doing sketchbooks for last 24 years, but find Goa project close to the heart. “When you go to a city, because I am a travelling artists and doing sketchbook for 24 years, you try to understand essence of the city. There is architecture, heritage, culture, people, history. I try to cover all the aspects possible in that stipulated time,” he said.

“The amount of experience that I have about Goa is pretty high. It is not like that I have to go and explore the city,” he explained.

Besides his childhood inspiration late Mario Miranda, Shaw will also feature pop-singer Remo Fernandes in his sketchbook. “I do lot of crowded compositions and that comes from Mario Miranda,” he concedes.

The sketchbook drawn exclusively with ‘water colours’ will also have lot many non-celebrities including a British man who runs a restaurant in Goa and Esabella Rodrigues, a lady who has a small-time business of manufacturing pickle of ‘jujube fruit’ (ber).

Previous articleGFP to move resolution for political reservations to ST in Goa assembly
Next articleTask force on coronavirus formed in Goa: Vishwajit Rane